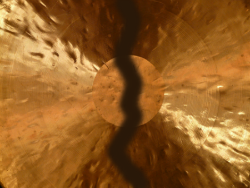 This afternoon, finally, I was writing. It felt so good. My own thoughts and ideas were emerging and sharpening, and I could see how they would be interesting and useful to other people. I was giving myself the gift of being in flow.

And I was so absorbed in the process, I didn't notice the laptop battery running down, and the computer shut down and I lost every dot of what I'd written!

Things have been kind of like that around here lately. Perhaps it's fitting that something like this happened just as I came clear that I've failed at my Gong and need to start it over. Certain voices are telling me I'm a failure and a disaster magnet. But let's see if there's some phoenix energy to be found here, some seeds that need another spell of sleep in the ground before they venture to sprout.

Unfortunately, once a seed has sprouted, it can't change its mind and return to dormancy if there's a late frost. Fortunately, I am not just one seed; I am as many seeds as there are ideas in a day, as many as there are mitochondria in each of my billions of cells. I can start another Gong.

But aren't I just buried in shame now? As I shared here, I set up my Gong so that it would be very hard to fail. Not only did I fill it with practices I absolutely need and want to do, I created a "buddy system for days" so that for some items, even if I missed it one day, if I did it within a group of three days I was in good shape. I tempered the discipline of "a deal is a deal, if you miss an item you have to start over" with the acknowledgment that even with discipline you can't control all circumstances.

But I still failed! And one of the ways I was failing was that I was short-changing my creative work, so how ironic that this afternoon  I got into it and then lost everything. "Everything"? No. Not everything. Here I am.

Although I'm in shock about losing today's writing, this is actually a decent time for me to fail, if we let "fail" be a synonym for "make a fresh start":

Imbalance and accident are signs of mismatch with one's surroundings and underpinnings, but synchronicities are the opposite. I feel very grateful that even on the most challenging of recent days I've been able to notice many blessings, to experience gratitude, and to challenge feelings of worthlessness.

I'll share more on this later in the week, but the major tipoff that I needed to restart my Gong was the recognition that I really wasn't--am not--clear on what it is I wish to manifest.  Now, the Life Mastery program provides massive underpinning to support clear goal creation before a person even starts the Gong. I knew that mine were less than ideally clear, and I thought I'd programmed in a way to get clearer as I went through the practices.

For my future reference, and it might help you too, that didn't work. It's okay to have to break trail here and there, but if you don't at least have a compass bearing or a GPS reference, you might be breaking trail in circles.

Sure, doing my daily Gong items definitely makes me feel better in time and space, and more on task and effective. But on those days when everything goes wrong, if I don't know why I'm doing any of it I find it hard to pull out of the funk, even with these helpful practices.

It's actually intimidating to put myself on the spot and say that I need to state some goals and desires toward which the 100-day Gong will usher me. But I also feel challenged, and excited. If I don't surface anything else in the next few days, the goal for the new/restarted Gong will be to find out what it is that I want, to live the experience that it's okay to want success and objects.

I don't pretend to fully understand wabi sabi, the Japanese aesthetic of beauty and uniqueness not just in spite of but because of imperfection. But I find the notion comforting. After years of calling myself a failure as a dirty word, I can think of the beauty of a slightly asymmetric cup with uneven glaze (I'm pretty sure I could be called a crackpot too), or of the misspellings and crossings out in William Blake's beauteous Illuminated Books

If those are failures, I'd love to be able to fail like that. And what's the other Japanese saying?

Written by Ela Harrison on Monday, 23 February 2015. Posted in Mindfulness