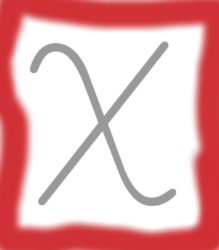 We love our cliches and jingles, but there's something really satisfying about words and phrases that step out and step back, are mirror images of themselves--"level"--"radar"--"madam I'm Adam." These are palindromes, which means (in Greek) that they "run backward." In Latin the word would be "retrocourse."

But "it is what it is" isn't quite a palindrome, and so "palindrome" is not the word for this spell.
The word is "chiasmus"--a word named after a letter.

Chiasmi are more common than palindromes, because it's easier to arrange a phrase in that symmetrical structure than it is to have each element literally in mirror image. Strictly speaking, though, our cliche should be "it is what is it," which I like better anyway.

Common and popular both, and not just in English. Rumi is so known and beloved for his poetry, but he wrote a prose book too, whose title is Fihi Ma Fihi, which literally means "In it what's in it." (And yes, some people try to translate that as "It is what it is." Groan.) Or take the traditional Arabic greeting--"as salaam aleikum" and response "w'aleikum as salaam" "peace be with you" -- "and with you be peace."

Common in common phrases with the reverence of the everyday, but also used in witty sayings or to state something memorable. In Alaska, there's generally a preponderance of unattached but somewhat oddball men. So I've heard many straight women on the dating scene say, "The odds are good, but the goods are odd."

There's something both economical and magical about using the same words flipped around in this way so as to mean something subtly different. It's a great example of how the sense of a sentence is greater than the sum of its parts, and the symmetry makes it memorable, too.

A sentence is greater than the sum of its parts, and a word's pronunciation, especially in English and Greek, is more than the sum of what its letters indicate. But "chiasmus" literally means "making of a chi."

The letter "chi"--in Greek χ--is the shape of a cross, an intersection. A chiasmus in language is like a march into the center and back out again. Which I feel more as one side of a cross, but the concept of intersection is definitely there.

It's interesting to think of a word being coined based on its structural resemblance to the physical shape of a letter. We have A frame, too, and T junction, and "T junction" has even spawned an associated verb--"keep going until the road Tees into 5th Avenue."

Of course a delta, as in a certain shape of river estuary, is so-called for its resemblance to the Greek letter delta Δ, and the lower part of the large intestine, the sigmoid colon, is so called because it resembles the letter sigma Σ.

One possible etymology of the word "element," which originally referred to letters of the alphabet as well as the general concept of a smallest component, is from the letters "el, em, en," with the possibility that at one point the Latin and Etruscan alphabets began there instead of at a, b, c like the Greek and Semitic systems. I scoffed at that idea when I first heard it, but actually there may be something to the suggestion.

One final way that the chiasmus is a cross is because of how its components transform in meaning from one side of the pivot point to the other. As above, so below, as on one side of the glass, so transposed you see a reflection of yourself.