Drug vs. Herb--More Distinctions, and a Case in Point

context and system can be more than the object itself 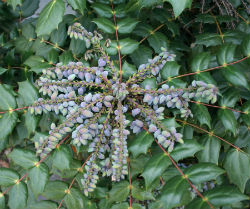 There are at least two more things I didn't mention in comparing the "herb" system and the "drug" system of using substances to bring about healing in bodies.

The two I have in mind both turn out to be relevant to today's specific example.  These are:
money and tradition of use.

Money.  Herbal remedies and natural supplements can be expensive, make no mistake. But aside from occasional scammers, or when there's a legality issue or gray area, which always sends up prices, the expensive herbs are usually the ones that are hard to find, difficult to harvest, transported long distances, undergo complex and prolonged extraction/blending processes, or are flat-out endangered.

Aside: in the "endangered" case, we can leverage the fact that plants exhibits overlapping benefits. An endangered plant may have a close relative that works similarly, or the same function may be filled by unrelated plants. We're going to look at berberine today, and one berberine-containing plant everyone's heard of is goldenseal. Goldenseal is endangered, and I never choose to use it. There are lots of other plants with similar chemistry, including some growing near here. Of course, it's overlap, not copy, but shifting is one of the things plants teach us.

But while seventy-year-old cured and extracted red ginseng root might be expensive, try a month's supply of Abilify, a third-generation antipsychotic prescribed for bipolar, schizophrenia, the other usual suspects. If you're paying out of pocket, you're looking at close to $1000. Per month.
!!!
And this is a medication the patient is supposed to take indefinitely and daily. Most other antipsychotics are less steep, because they've been around long enough that the "generic" version is available as well as the brand name. Generic  quetiapine is quite a bit less expensive than the brand-name Seroquel, but would still be at least $100/month out of pocket and sometimes double that.

The "generic vs. brand" distinction is only an illustration of how money-driven the "pharma" version of medicine is. It's a position of power, like a monopoly. You don't have to look far for stories about doctors and medical students being essentially manipulated by the financial interests of drug companies. There's a great recent interview on Underground Wellness with an ex-drug company rep telling some of his experiences.

So really the money distinction isn't simply about money and the drug and health insurance industries and affordability issues. For many people, it's repugnant to even be connected to that system. Getting an antibiotic is no longer a simple question of whether to use such strong, faster-acting medicine and possibly get on your feet more quickly or take a slower-acting herbal protocol. It becomes an ethical issue of selling out/buying in.

As I said before, pharma medicine has its place, so this ethical dilemma can be difficult if a person is fogged out with Lyme disease or prostrated with amoebic dysentery. The antibiotic could be a lifesaver, but the feeling of selling out could be too bitter a pill.

Tradition of Use. I'll be briefer with this one. Herbal medicines are generally traditional medicines, i.e. they have been used for a long times in specific places for specific things. Modern herbalists innovate, of course; they have to. Modern civilization, with all its wonderful benefits, also provides conditions, toxins, disease situations not paralleled in the traditional setting, and herbal medicine adapts alongside.

At the practical level, Michael Moore promoted the use of leaves and stems/branches of plants whose roots had been traditionally relied upon, claiming that these upper parts were also effective medicine. Coppicing some branches actually promotes growth, whereas harvesting the root can diminish the plant's vitality or kill it outright.

"Tradition of use" implies that an herb is known as medicine for a specific type of ailment. On the other hand, there are no "side effects" in the herbal system.  My experiences with desert willow and also with lithium (a "pharma" drug) are quite in keeping with the breadth of scope herbalism expects. Plants and people are complex organisms, so their interactions might well be complex. And here again, psychiatric drugs (including extremely simple ones like lithium carbonate) prompt anyone paying attention to acknowledge that the interaction between person and pharma drug is also extremely complex and variable.

What does "off label" mean? It means the drug was approved by the FDA to treat X condition but psychiatrists have found it so effective for Y condition that they prescribe it for that condition.

The rest of this post is about an "off-label" use of berberine, a plant extract with a great tradition of use, in a way that's completely confusing the herbal and the pharma systems in a way that might do more harm than good.

Berberine is an antimicrobial compound found in many plants. Most people have heard of goldenseal. It's also in oregon grape and other plants in the mahonia genus, barberry, coptis, California poppy, and more.

Before anything else, it's a bitter, which means it's a digestive stimulant and potentially a blood-sugar balancer. As such, it would be used in tiny doses (drops of tincture, not dropperfuls) once in a while. It is also antimicrobial. In a petri dish, it knocks out MRSA, but it's unlikely that we could ingest enough for it to do that in our bodies. Instead, I've heard it makes antibiotics work better if we take them together (herb and pharma together? Imagine!)--in the context of MRSA, i.e. antibiotic-resistant staph infection, taking a berberine-containing substance along with the antibiotic removes the bacteria's resistance to the antibiotic. Technically, then, it's an "alterative," which often goes along with being a bitter.

Now here comes the problem. A recent study compared berberine and metformin in type 2 diabetics and showed berberine equally effective. You might say, "so what?" Well, so perhaps a drug company can make a synthetic version based on this knowledge. But they can't patent a plant (can they?), so meanwhile many type-2 diabetics or prediabetics or just anyone concerned about their blood sugar can put themselves on berberine and feel virtuous about using a "natural product" and glad to have dodged Pharma.

But wait a minute! That's an "off-label" use of berberine, and berberine is a chemically isolated/extracted compound from a plant usually used in whole-extract (tincture) form, usually used for other things and sporadically, not as a regular medication. In other words, it's being used both at greater strength and greater frequency than tradition of use would have, as well as in isolation from everything else that would be contained in a plant preparation.

A good take-home from the herbalist perspective would be that anything with bitter taste activates bitter receptors on our tongues and improves insulin sensitivity. Anything bitter! Berberine, kale, coffee...
And then another take home for me. Turns out there is a tradition of use in glucose regulation after all, but in Chinese medicine, not the western herbalism I've been mostly studying. A coptis-family plant was used for that in China 1500 years ago. Keep on learning!

But here's the biggest take home. The study just quoted is so pleased by the glucose-regulating effects of berberine (in rats, btw), but they don't pass comment on the finding that berberine downregulated the gonadotropin-releasing receptor and hormone. Psst--this highly extracted plant can shrink your gonads! But your blood sugar will be better.

If we take Pharma and money and health insurance out of the picture, what are you dodging by taking berberine? Metformin is a medication that seems to be so beneficial for overall health that longevity expert Dr Bill Andrews recommends and uses it daily.  (And he has no issues with blood sugar.) Its benefits and safety are explained by the smartest blogger I know on the subject.

Who do you listen to? Paying money is a form of paying attention. The best news to me is the idea that berberine can disarm antibiotic-resistant staph so that antibiotics can work in what's an appropriate use for them. And I would use a berberine-containing tincture as a bitter or as an antimicrobial. But I'd be just as wary of berberine "the extract" as I would be of the same chemical made in a lab, androgyne though I am. I wouldn't tell my dad or brother to take it.