Equinox: Casting a Shadow Both Sides of the Line 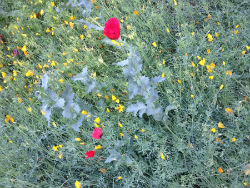 The solar eclipse together with the Pisces energy weaves in some finality amid the forward-looking springtime aspect of the equinox. A good time to move out of one set of habits and begin to inhabit one's life in a new way, but also a good time to move out of life altogether. Several people I know have had loved ones pass over, some of their own volition, in the past couple of weeks, and there will be more in the next few weeks. Death is change, and change is death.

"In the past couple weeks," I said... Not everything shows up on the momentous day itself. Don't you notice the full moon energy several days before and after? Consider, the huge astrological synergy of yesterday's equinox was arrived at by the incremental motion of incomprehensibly vast objects.

Personally, I underwent a great change/new beginning three weeks ago, on my birthday, and I felt the equinox energy driving that home deeper and inviting me to visit the next set of consequences. I notice humbling to my own truth, and acceptance that there will be more changes and that my heart can be my compass.

In our Sufi equinox celebration, we worked with the Native American medicine wheel. (The pictured poppies are in the middle of the wheel.) We worked with the four directions as well as "as above, so below," and we journeyed in the medicine wheel with seen and unseen beings, living and dead, of the past and yet to come.

There was a wonderful awareness of our separate and shared realities. We had different animals appear to us, we had different departed loved ones' voices come--some deceased in this time of opening, some gone years ago. But when we shared our visions, we grew from one another's insights.

Invoking the cardinal points, and above and below, with the medicine wheel as container, reminds us we're always moving. Day and night are the same length on equinox, and every day from now until summer solstice the night will be engulfed by just a little more day. A reminder to be aware of where we're coming from, and what we're moving into. Oh, here's the fire-red south energy again. Now we'll soon be moving into west... And in the vertical movement above and below, the inviting in of the departed, the not-yet, the disembodied, I felt met and recognized in my own experience of time as out of order.

Separate and shared reality at that gathering. At the second gathering I went to last night, the program ended with a demonstration of how closely connected we are. We held hands in a circle, and the leader and the person standing next to her (who happened to be me) each put our thumbs to the electrodes on a little ball. With everyone holding hands, the ball lit up and wailed. But if anyone let go their hold, anywhere in the circle, the ball fell silent.

Light and sound, as well as bodies. Someone who passed to the other side is likely still in the above and below of your personal medicine wheel, and still interlinked in the circle of hands that gives warmth and breath to create light and sound.

One last thought on the timelessness of all this. Of course it's the first day of the month in the Jewish (lunar) calendar, so Shabbat service this morning was extra long. Alienated by the Torah portion of the day, I realized that it was all about what and how to slaughter and sacrifice in expiation of wrongdoing. And I thought of the very proper/middle class/urban Jews I know and tried to imagine them slaughtering the bull and separating meat from bones from fat, and using the blood as protection, smearing it on their property.

Something incongruous about that picture, isn't there? It sounds like--witchcraft?

Let go of time, and see how we revert to the same practices, how the planets and sun and moon remind us to look at the shadow we cast behind us, at the shadow being cast just ahead of us, so that we can discern when to experience the "separate" and when to experience the "merged," when change means moving on and when it means up/down/through/beyond.

Blood belongs on the inside, so anointing it on the outside is a potent way to set a boundary. It acknowledges that boundaries are both extremely important and are paradoxical, since we are all one. As above, so below; as within, so without.

Written by Ela Harrison on Saturday, 21 March 2015. Posted in Mindfulness