first of many posts on this 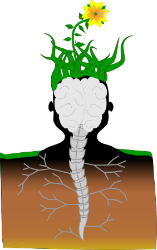 How, how, HOW?! (lots to say about this in posts to come)
And--how ironic that food obsession has been cured by what really is a strict diet, given that most eating-disorder treatment focuses on getting patients to give up strict rules. When I explain why/how the ketogenic diet is working, you’ll see the beauty of this: it’s likely that even the anorexia, as destructive as it has undoubtedly been, was a subconscious effort at self-regulation and healing. Nothing has been wasted…

I realize that I’ve just put about five carts before the horse. I haven’t explained what a ketogenic diet is (beyond the very lapidary 85-15-5, and there’s far more to it than that). I haven’t explained why I thought it would help, why my initial attempts with it helped a little but not much, and--perhaps the big elephant in the room for those concerned about my eating-disorder history and schooled in the “let go of strict diets” concept of therapy--how I can maintain that what probably appears an extreme diet has cured an eating disorder.

If this is five carts before the horse, it’s material for at least that many blog posts. I will deliver. One kiss of the elephant at a time, right?
But I’ll start with that elephant in the room, as it really is one of those cases where a great, dark shadow turns out to be the penumbra around the light.

Bipolar disorder in the brain and celiac disease in the gut are two labels that often go together. We’re understanding more and more nowadays about the intimate connection between brain and gut, and it makes sense that such a serious malfunction in the gut could impact brain chemistry. And/or, it makes sense that some sort of misfiring within the brain could impact gut function. Both-and.

Sometimes, the two very clearly coincide. For example, like about 50% of people with celiac, I am allergic to dairy as well as gluten. Several years ago I had a couple of episodes where I ingested some whey protein (once on purpose, once accidentally). Both times, even before the physical allergic symptoms hit me, I was swept away on a tide/tirade of bipolar rage/rampage. I was so out of control, I couldn’t even stop to analyse that my brain felt like it was receiving electric shocks from a cattle prod. It was unpleasant for everyone around me and scary for me too.

As it turns out, the one condition for which the ketogenic diet has the longest history of approved and proved use and efficacy is drug-resistant seizures. I’ve written before about the close relationship/continuum between conditions from migraines through epilepsy and bipolar through schizophrenia. Some psychiatrists believe that bipolar and schizophrenia are basically seizure disorders; these conditions are routinely treated with very much the same medications (bipolar and schizophrenia gets treated with antiseizure meds just as often as antipsychotics, and migraines and epilepsy get treated with antipsychotics). Again, these are all labels, and not all cases are the same, but my brain symptoms are definitely seizure like (including being triggered by certain light and sound frequencies, flickers and loops, and even smells and colors, to the point of being afraid to go out).

Now, here’s where we really shake hands with the elephant. The ketogenic diet had been used to treat seizures all the way back to the time of Hippocrates… but ketosis was induced by fasting. The very-high-fat diet we’re talking about here was developed in the 1920s as a way of eating that would control brain overexcitation/seizures without having to fast forever. I’ll go into this more in a later post, but an element of caloric restriction and certainly of less-frequent eating is also desirable as part of a therapeutic ketogenic diet for these purposes (and is easy and sustainable to do on this way of eating, I might add).

Now can you see why I might have developed anorexia out of self-preservation? Isn’t that awesome?
Starting with that big one, here are the reasons I believe a ketogenic diet has been a gamechanger for me: It

I will write more about all of these in due course. Please let me know if there are other reasons I should consider too. Since this post is ground zero for what’s going to be quite an elaborated discussion on this, I’ll conclude with a few things that the ketogenic diet is not.

Well, there’s a start. I feel like I could write about this forever, and there are many other things I want to write about as well. Please let me know if anything is unclear or if there are other aspects I’m neglecting that should be up here too.