Herb of the Spell: "Rosemary for Remembrance" 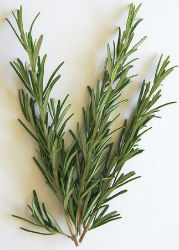 Okay, part 3 of our first tripartite spell! Since the mindfulness part was about remembering/forgetting in connection with boundaries and the language part was about the word "remember," you might have expected me to pick "forget-me-not" as the herb for the spell.

But  there was never any doubt for me that I'd be writing about "rosemary, for remembrance." It's such a wonderfully versatile aromatic herb, and although it doesn't have as much associated folklore as parsley or fennel do (stories for another day, perhaps),  it's been used and loved for millennia.

Keep a vial of its essential oil by your desk and take a whiff if your energy flags. Notice the renewed wave of clarity.

Stepping back for a moment, something I love about rosemary is its deceptive name. It looks like rose + mary, right? Two girls' names put together, like Marilyn, or Lou-Anne. Looks like that, but it isn't.

For Latin, this plant was "the dew of the sea." (And there are several other plants with similar names in English, like ocean spray, sun dew (no, not mountain dew, silly!!))

A plant that can grow within spray of the sea must be tough and hardy. It must be able to withstand salt, high winds, and eroded soil. This specimen looks pretty darn tough, tough and grown almost into a heart shape. 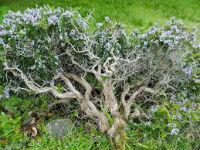 Rosemary was one of the herbs I played with in the yard as a four-year-old both in England and Israel, two quite different climates. It couldn't weather an Alaskan winter, but otherwise I've encountered it everywhere I've gone on my travels in life, and it's been a friend all that time.

When I was in college, I made rosemary vinegar (an ounce of chopped/bruised rosemary steeped in a pint of apple cider vinegar for four weeks then strained) and used it as a pre-shampoo scalp treatment for dandruff. It worked. Once again, the head, the memory, no more flaking, right?

Those years, too, roasted potatoes and rosemary became an inextricable combination in my mind. And I'm pretty sure I had the idea for a potted rosemary Christmas tree long before that became a commonplace item (although I should point out that rosemary is related to mint, not to fir or spruce trees!).

Most of my gardening here is still in pots, but the first plant I put in the ground in front of my house was a rosemary. 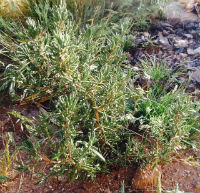 Here, where it's scorching hot in summer and freezes in winter, where the soil is jackhammer hard in places and the riverbeds are dry, rosemary thrives all over town.

Tough, versatile plants are very often highly toxic, or highly medicinal (which you may consider two sides of the same coin).

Rosemary is no exception; it does far more than team up with vinegar to deflake scalps. It contains many anti-cancer compounds.  The aromatic compounds are known to be antiviral, antifungal, antiseptic, and it also contains vitamins and minerals. See e.g. here. In this longer study from Malaysia, rosemary and sage came top for antioxidant and antibacterial properties.

Another of rosemary's compounds is called carnosic acid. That carn- part denotes "meat." Interestingly, it got this name before they figured out that rosemary inhibits creation of cancer-causing compounds in meat cooked at high temperatures! Heterocyclic amines are compounds created when meat protein is exposed to high heat.

These compounds have been shown to be carcinogenic, and even worse when combined with lots of sugar, as in barbecue sauce. But when the meat is marinaded with rosemary in particular, or other aromatic herbs, as has been done traditionally in many parts of the world, the creation of these compounds is drastically reduced.

So, cook with rosemary, take a whiff of the oil to clear your head. (*I strongly suggest you NOT ingest the essential oil. Rosemary contains so many aromatic compounds just in one small leaf, and thousands of such leaves go to make a tiny amount of essential oil, and sometimes the distillation process brings in impurities. On the other hand, putting 15 drops of rosemary oil in a spray bottle with vinegar, water, other essential oils like tea tree and citronella, and cayenne,  is great as a bug spray or house cleanser.)

Chew a leaf or two. Make a vinegar for your scalp. Or just crush and bruise a few leaves and add to your water, or add a few leaves to your tea or coffee. In cold and flu season, you could add crushed/bruised leaves to honey and leave it for a week, and the honey will extract the aromatic compounds. You can then use the honey with a vinegar or tea, great cold-chaser and opener of mucous membranes.