How to Have a Monkey Mind... 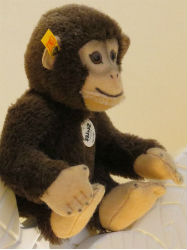 Sit in a quiet place, cue all the environmental messages to put yourself in a meditative state, and try not to think about monkeys. 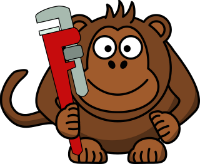 Don't think about the monkeys on the streets of Lopburi, Thailand, raiding the backpacks of tourists who can't help getting a little too close, or about the monkey house at the zoo, or sea monkeys languishing in the aquarium.

Have you come up with some of your own ways not to think about monkeys yet? Bananas? Gorilla glue?

I love that little exercise, for two things it shows:
(1) That "don't," "not," "negation" are triggers for monkey business! Evidently, monkeys and monkey minds are contrarian--tell the mind monkey not to do something, and all of a sudden that "something" is salient, and off we go. I don't believe this means that the subconsoious doesn't hear "no" at all, ever, as often claimed. But it does show how important it is to frame what we focus on.

I drank a lot of alcohol in my early 20s; nowadays, and for years now, I don't drink. And it's not even on my radar, despite the bottle of vodka under the sink for making herbal tinctures and for cleaning. I don't think of myself as "person who doesn't drink alcohol." Just like I don't need to remind myself not to think about monkeys when I'm going to meditate.

(2) The other things the monkey exercise shows, though, is how richly associative a monkey mind is! We had real monkeys in specific places, cartoon and toy monkeys, tools and gym equipment and foods associated with monkeys. I love the monkey-ness of my mind, its agility in making these associations, how it's not just the words but also the concepts, how different languages have different word associations and puns.

Here are some other ways to have a monkey mind:
- Keep 20 tabs open in your browser, at least two of which have notification chimes or randomly autorefresh and start playing audio
- Sit down to meditate, but leave the stove on
- Drink a bunch of caffeine in the afternoon; bonus points for mixing with other stimulants or sugar
- Eat a whole bunch of sugar, even fruit (exception for a few successful fruitarians)
- Start on a new diet/way of eating, and immediately sit down and read everything written against that diet/by those for whom it "didn't work."

Yes, a lot of that is pure crazymaking! And I'm quite guilty of practicing a few things on that list. I say practicing, because if I keep doing it, consciously or not, I'm practicing it and making myself better at it. So, um, yes. I'm going to close several tabs on this browser in just a moment! My mind needs no more reinforcement to become "monkey like" than just to tell it "don't think about monkeys."

So, the brilliant associativity that comes with distractability (all those varieties of monkey)--how to harness it? Close some tabs, control that caffeine intake,  sleep well, and put the monkey to work. Where's that little turning point, the bit of yin inside the yang where transformation happens?

Juggling. A proverb for having your eyes everywhere at once, "keeping balls in the air." The mind is distributed, and yet super focused.

What about a farmer? She walks out to the chicken coop and collects eggs while checking on a dozen small details about the flock. She continues to the fields, where she looks at how well plants and weeds are growing, whether the soil is moist or dry, what's flowering, whether there are enough or too many insects, whether there are coyote tracks in the ground or the herd of elk has passed through the night before.

A tour guide--how does he hold the attention of his motley group of tourists, answer their startlingly random questions, keep time, tell stories, keep to a route?

Mindfulness, focus on one thing at a time, is wonderful for the calm it produces, the productivity it produces. But since we do have this monkey mind, there's something so exhilarating about getting to use it in tasks for which it's suitable. People avoid an ADD/ADHD diagnosis their whole life by finding a career that requires this kind of distributed, associative focus.

Written by Ela Harrison on Monday, 12 January 2015. Posted in Mindfulness