Interlude: Visiting with the Relics 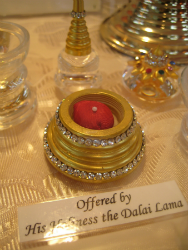 There's a couple posts still to come on the changing face of the book, but it's time to talk about objects.

A big difference in today's bookscape from what went before lies in the material objectiveness of the book itself. Instead of a huge, ornate, unique work of art, a book now can exist solely in electronic form, immaterial in the sense that it's not composed of "matter."

I would suggest that when something is immaterial, non-physical object, it's less likely to be objectified. How appropriate, then, to go visit a touring exhibit of Buddhist relics, where the whole of devotion and spiritual consciousness is focused into pieces of body.

This weekend the Maitreya Relic Tour was in Tucson. It's an exhibit of relics of Buddhist masters, traveling the world. It's been here once before.

Although I love the Thai temple here in Tucson, which holds beautiful guided meditations and community gatherings, I wasn't sure I wanted to go look at a bunch of bits of bone that purportedly survived cremation, and a few hairs and talismans. Aren't bits of body the very least interesting/important part of an enlightened soul?

But when two of my Sufi friends separately told me how profoundly they'd been affected by visiting, I decided to go. The concept of a relic is similar to the old concept of a book as sacrosanct and unchanging: here it is, a potently charged object changeable only by time, the same for everyone who experiences it; it may change us, but not the other way around.

But of course, what's really true is that we create the experience, even through intangibles like willingness to be touched spiritually by a "relic," and (consider too how a book grows in popularity) the awareness and intention of a group magnifies this effect.

Visiting the relics at the temple was a far different experience than if the same objects had been in a museum, although the impromptu sales table in the vestibule with mala beads, incense, and books channeled something of that tourist spirit.

The meditation hall was lined with chairs, almost all occupied by people meditating. Two monks sat on the east side of the room with cushions at their feet on which one could kneel to receive a blessing. Candles everywhere, and water, flowers--lilies and orchids, and crystals--quartzes and selenite. Incense was burning, but subtle incense, and music was playing softly. Even without the relics themselves, the room is always full of images of meditation, calm faces and hand positions, reposing in dark teak, blazing forth in gold.

All these sensory features were harmonious--the gold plate not gaudy, the music not obtrusive, the incense not suffocating.

Visiting the relics involved traveling clockwise from the south around the perimeter of a rectangular table that took up most of the hall. And this journey wasn't just gawking at the little calculi of fired bone, the black and gray hairs--on every side of the table was an invitation to do something sensory.

One started by "washing the baby Buddha"--dipping up and sprinkling water over a standing child-Buddha figurine about two feet tall, while praying to be cleansed of negativity and to be allowed to help all beings. Then there was a prayer wheel one could spin while sending up a prayer. And there were two small bells to ring also.

For me, looking at that this or that small stone that had once been part of this or that lama's femur was the least significant aspect of the visit. But even that had more effect on me than I'd have guessed. I'm a lover of rocks! I come home from hiking with rocks in my pockets and pack, I buy crystals, I rub dirt between my fingers.

Human or not, bones of the earth, seeds of matter. The exhibit was such a rich sensual experience, every sense awakened with beauty. It wasn't lost on me that all of this awakening was based on the presence of these physical relics.

And when it comes down to it, I believe this is the underlying truth with books too, even back when books themselves were more like relics. More on that in the next "book" post.

Having gone all around the table, I decided, impromptu, to receive a blessing from one of the monks. After putting his pagoda-shaped object on my head and murmuring a prayer, he initiated a short conversation that consisted of him questioning me as to what I do. I told him I'm a writer and editor and love to work with herbs and languages, and he asked a few more questions.

I was so surprised to have the stuff of my life come up for attention in that space. "Me? What I do? How is that relevant here?" asked my ego. I suppose even self-effacement is of the ego, and even my mundane tasks are part and parcel of divine worship. And wouldn't you know, my morning scripture today, opened to at random, said pretty much exactly that!