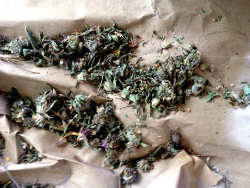 ^I think I've used that phrase as subtitle once before. Which makes it QED.

So much to write about! I promised monarda, so let's start there. Actually, monarda is a perfect place to start, for as Michael Cottingham put it so succinctly, "monarda is movement."

I'm moving. Again. And yet feeling some stickiness on certain levels too, and currently in the entropic state where objects waiting to be packed seem to multiply and magnify. Plus ça change, plus c'est la même chose.

Sometimes when my brain is bothered by flashing lights, I entrain my blinking so that all I see is the light continuously on, or continuously off, depending on my choice. If you keep blinking, keep closing your eyes at the critical moment, you might not see the crucial moves, you might think something dynamic is static. Which can be a problem for levels of insight but a balm and a rescue to a hurt brain.

Imagine what other completions of reality I might be missing out on in inattentive moments. That's how a particle turns out to be a wave. The sun itself is in orbit.

On the other hand, a swollen tumult of sound and fury can signify nothing. Wheels can spin thousands of rpm and gain no traction. On the other side of the globe, you'll encounter the same relationships, the same judgmental tendencies, the same suspicion of unworthiness, the same constipation and proclivity for liquor. That's how a wave turns out to be a particle.
Keep blinking, and you'll see monarda as a wave carpeting much of America, known as Mexican oregano, as bee balm. Look at it again, single-particled, and you'll see how it keeps company with marjoram, oregano, rosemary, and thyme. Don't feel bad if you've ever confused one of these for another: all of them--and monarda too--contain thymol and rosmarinic acid, important medicines both.
Monarda, named for Senor Monardez and thus giving no clues to its nature by its name, contains more thymol than thyme, whose name does offer some clues. Thyme is from Greek θυμός, which is spirit and strong emotion and, basically, heat.

Two different species are in reach of Tucson--monarda pectinata and monarda menthifolia. The latter, with the big single terminal flowers, is named for its bigger leaves shaped like their cousin, mint's. Pectinata, which means "combed," has little leaves and bracts of modester flowers. 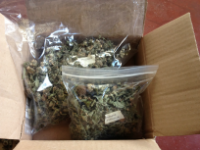 Both are spicy! (They taste and act similarly, but menthifolia, slightly hotter perhaps, is easier to work with). Hot and dry energetically. Great as a dried herb in food or as a diaphoretic tea that can also calm flatulence and move a stagnant gut, it's also tinctured or made into a honey. The flowers are simply immersed in honey for a few weeks and can themselves be eaten afterward too. Honey mellows monarda's heat and dryness.
Honey is also far more sugar than I'm willing to use at the moment, and I'm also experimenting with avoiding alcohol as a medium of extraction, so I split the difference and made a glycerite. Extracting into glycerin has some properties in common with alcohol extracts (smooth, runny liquid; glycerin is a sugar alcohol and so processed somewhat similarly) and some with honey extracts (also sweet and demulcent). 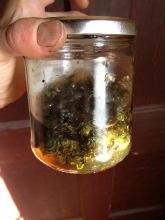 This medicine has supported me in all the spinning of wheels and gyrations around same-old particle-ar problems; it's also helped me to feel a sense of ground beneath my feet amid the waves of change that keep on waving and changing.
It's calmed the rebellious small intestine, and it's also cleared my head when the path seems unclear or I'm berating myself for something done or omitted.
Most medicines I make are for other people; this one, it seems, is all mine. I need to gather more flowers so I can share.
Also all mine is the acetum aka vinegar I made with monarda. I love rosemary vinegar, and monarda vinegar might be better yet.

Written by Ela Harrison on Tuesday, 20 October 2015. Posted in Mindfulness, Herbs and Plants