Only if it isn't what it was 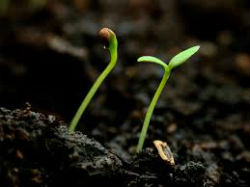 How we love our cliches in our poetic little hearts. Those five monosyllables, comprising just three distinct words, symmetrically arranged, trip off the tongue. The vagueness of the "it" pronoun lets you feel just short of flat-out tautology, and with "the right inflection and body language, you could purport to be saying something quite deep.

In case (1), are you accepting, or are you in denial about change that is in fact possible and inevitable? In this case, "It is what it is" seems one step worse than "Que sera sera, whatever will be will be." Where the old song suggests that we can't control or foresee the future entirely, our new cliche seems to suggest that we can't change anything in the present either.

But the truth is, the present is the only time we can change anything--and we can and do change some/any/every thing. In fact, to take down another cliche a little bit, it's not really insane to keep doing the same thing and expect a different result. As a young musician, if I hadn't practiced my scales every day hundreds of times, often with flubs and blips and squeaks, I'd never have gotten to the point where I could run up and down any scale in any key flawlessly.

So perhaps day to day at the beginning of that process I might have told the truth had I said I sucked at F sharp major and couldn't seem to get my high E flat in tune--it is what it is--but because I kept on practicing, discouraging as it was at times, it soon wasn't what it had been.

In cases (2) and (3), "it is what it is" is essentially saying "because I said so," or "I'm not willing to think outside of the box." At that point the cliche becomes awfully neat, like pouring formaldehyde around a living insect that happened to be holding completely still.

In such contexts, I always want to respond with another cliche--this too shall pass.

Written by Ela Harrison on Monday, 30 March 2015. Posted in Mindfulness