our bodies are neither garbage cans nor cars 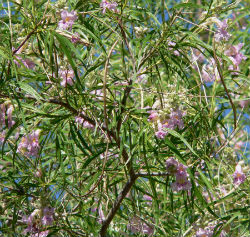 Placebo, nocebo, actio--the first two words of this Latin trio are verbs; the third is a noun.

"I will please, I will harm, action."

Note: although the current sequence of posts isn't following the "tripartite spell" format established a month or two ago, the notion of the spell--the combination of word- and plant-lore--as basis for how I structure my thoughts is still very salient.

I've been thinking a lot about what it is to be conscious of what we put in our bodies--several posts to come on that. You might expect me to praise the placebo/nocebo effects, subsets of the Law of Attraction. But in fact, I want to point out that chalking everything up to placebo/nocebo can be dangerous.

At the end of a weekend camping out with herbs, the group of apprentices and teacher sat under a tree in a dry river wash. We looked at the tree, its old roots poking up through the sand, tuned into the musky aroma of the leaf clusters and terminal buds. A bottle of tincture made from its leaves/stems/bark was passed around and we each took a squirt and sat quiet.

Then we shared our experience. One person "didn't feel anything." Some noticed some clearing of their nasal passages. Three of the nine of us had intense regression experiences--in my case, I was dropped straight into a tortuous memory of a difficult and psychotic time and shown how to use that time to work positively moving forward.

The tree in question was Desert Willow, chilopsis linearis, a great soil-holder and also a beautiful tree used in landscaping all over Tucson; I saw it on highway medians most of the way to LA, and quite a ways up into New Mexico also. Had I read up on the tree as medicine beforehand, I would have been led to believe it was mostly a lung remedy with possibly some antifungal efficacy.

I wouldn't perhaps have been open to it as a shamanic ally.

Plant medicine does its thing, imparts its wisdom, and sometimes we're unprepared. Which can be a good thing, as here for me with desert willow, or it can be less positive, as when I wiped out my gut flora a few years ago through over-zealous use of an herb I didn't need to be using.

I make no argument against the placebo/nocebo effect. If you believe something will be good for you, it's more likely that it will be, and conversely. This has been heavily studied and demonstrated with all kinds of details and chemical congeners. I believe that our beliefs and thoughts shape our lives.

However, a boon of my deepening study of herbs is that it's showing me that beliefs and thoughts are not everything--MATTER MATTERS. (Which of course I've also known for a very long time through having celiac.)

If you go through life believing that nothing's quite real, that it's only a holographic projection, it's easy to end up treating your body (has been easy for me to treat my body) as a can to throw stuff into, having perhaps made up a bunch of rules for what may or may not go in. It's easy to throw stuff in somewhat unconsciously and then self-flagellate upon realizing you haven't done the work to transmute the stuff from gross matter into whatever holographic projection you wish to "manifest."

When it comes to medicinal herbs and supplements, the placebo/nocebo thinking gets magnified to such a point that many believe herbs/supplements etc. are pure placebo. Perhaps that's because legally, medical claims cannot be made for herbs or supplements, and even if we don't think that influences our thinking, it does. Perhaps it's because we're urged to think of herbs as safe and somehow different from "drugs," and perhaps it's a species of "greenwashing," with the perennial and misleading (yes, I said it) contrasting of natural vs. synthetic, with the former being angelic and the latter diabolical.

Perhaps it's because, notoriously, some supplements don't contain what they purport to contain and so can't work in the way that they're supposed to except by placebo. And perhaps it's because some supplements are touted as "superherbs" or "superfoods" and we're urged to try them but cautioned that we might not notice anything, or not right away, or that we'll never notice anything but we will gro w a halo or have an unfair advantage. 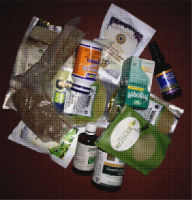 I've ended up with quite the haul from my various herb/superherb/supplement experiments. It can get expensive; on the other hand, I pick up all kinds of things on clearance; on the third hand, I've always wildcrafted quite a lot.

Some of the (randomly selected) items in the picture have done nothing at all for me, despite strong claims for what they should do. Some I've witnessed having no effect on me but affecting a differently constituted friend dramatically. Some have played a significant role in my healing. Some I know how to use for other people.

Some of the items pictured I've bought--sometimes multiple times--because they're heavily promoted in the raw food/superfood community by charismatic people, some of whom even have their face on the product.  But hey, I can take a full teaspoon of this "superherb" and notice nothing, but when I take a teaspoon of this other herb I have to stop what I'm doing two hours later and lie on the floor and listen. Which further brings to my attention that I'd noticed nothing taking the first herb.

I for one am no longer going to buy herbs just because they're "superherbs" and it makes me feel like part of a club (which is another aspect of placebo, of course). And after I almost made myself unroadworthy today by combining three potent herbs as if their impact was solely dependent on my beliefs (it wasn't; some serious chemical reactions went down inside my body), I'm going to beat the drum of actio for a bit.

I still believe it's all a holographic projection. But I'm not strong enough (?yet) to override all the physical cause-and-effect patterns already in place. Since I love herbs, since I'm working with herbs, it's good to embrace what I keep being shown--that they do things--they are agents, they act--they are alive, sentient, intentional.  My beliefs are only one thread in the weave.

Written by Ela Harrison on Sunday, 31 May 2015. Posted in WholeHealth, Herbs and Plants