what can be learned from personal mismanagement/misfortune 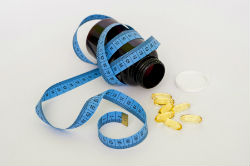 I gained a lot of weight in April. Over five pounds, over the big 90 for the first time in a couple years. More than I've gained inpatient at places that specialize in forcing people to gain weight.

The horrible irony: I was almost content. One of my scales said the "right number." I just wanted to lose two pounds so my other scale, which reads higher, would satisfy me too.

But this post isn't a pity party, nor is it a discussion about my weight. Having fallen into the weight-gaining dieter's oblivion, unable to look at what was going on, it's useful to put a spotlight on what happened.

The mechanism by which the diet pill involved facilitated weight gain might actually be helpful to other people in other contexts.

I'll start with a brief "here's what happened" (the experiment) and then offer some ideas on why, and why/how this might be useful to someone.
Let's get two things out of the way:

I overate horrifically, repeatedly, consistently. The opposite of my normal starve-friendly behavior. And on foods I never normally eat at all, high in both carbs and fat (coconut ice cream, potato chips). (*There's a reason why most diets, weight-loss oriented or not, are either high fat or high carb (not both), aside from the neuroprotective claims of high fat and the cardioprotective claims of high carb. The high-fat-high-carb combination seems to be uniquely fattening. Rather than invoke food reward, it may be sufficient to note that high carbs drives insulin release, which promotes storage of energy, and high fat on top of high carb=greater energy density overall, so there's more energy to push into cells.)

So much for my abnormal behaviors and how they played into what happened. But normally I wouldn't be able to eat such quantities without getting very sick. My celiac-leaky gut simply isn't up to the challenge. For the period of horrified-oblivious scarfing, I seemed unstoppable, as if someone was lacing me with Zyprexa. Speaking of Zyprexa, I've taken various antipsychotic medications known to induce this kind of out-of-control eating without having that issue.

Antipsychotics don't do any favors to the digestive system, which is probably part of why I've been safe from them. But the diet product I chose to take--Calorease, a fiber named cyclodextrin--seems to have enhanced my ability both to consume food without getting sick and to actually absorb it once consumed. Ironically, the stated mechanism of action of the product is that it's a fiber that binds to dietary fat and escorts it out of the system undigested and unabsorbed. Since most of my calories come from fat, I knew that this wasn't necessarily a smart way to go. Perhaps it had this paradoxical effect on my system because it's recommended for use by overweight diabetics and, no matter what dysmorphia might say, I don't fall into that category.

The other reason I should have known this was a bad idea is because you have to be really careful with fiber! There are old wives' tales about fiber being essential to "keep you regular" and there are old wives tales about fiber stuffing you up and the mineral oil being the lube o'regularity.There are many different kinds of fiber, also, and they shouldn't all be considered the same. "Resistant starch," a fancy and faddish name for a specific indigestible carbohydrate, is touted as essential in certain parts of the diet-sphere, but  anecdotally many people find it causes them intense gastro-intestinal symptoms.

You have to be really careful with "fiber" (which refers to many different things) for the same reason you have to be really careful with "probiotics" (ditto): they directly impact the bacteria in your large intestine. Fiber feeds these bacteria, and different fibers will nourish different bacteria. Probiotics are bacteria, and they may or may not play nice with the ones you already host. This is something I've written about a lot already on my old blog, including the idea that it's wise to think about what else you're feeding when you eat (coining the phrase "My bugs made me do it!"), and that parasites (and commensals, for that matter) also poop inside of us.

I knew all that, and I still went ahead and took this pill? Seduced by the promise that it would ensure a 500-calorie/day deficit, unable to stop the train wreck when the opposite was clearly happening or even to recognize what was going on. Uncompromising avidity to drop weight makes me too much of a risk taker.

So why did cyclodextrin fiber enhance my absorption and increase my appetite? The second part is easier to answer, and is the part the marketing leaves out. I would eat something and feel like I hadn't eaten anything. This isn't the same as feeling hungrier than before I started if I eat something sugary, where the agitated feeling nonetheless alerts me that metabolic processes are happening so it's easier to talk myself out of hunger. This was more like tabula rasa. If the cyclodextrin really was binding up the fat calories (i.e. most of the calories) I was eating, tabula-rasa hunger was an appropriate sensation, and secondarily also the desire to eat more carbs (immune to this binding effect), which I normally neither crave nor process at all well.

But how come I was able to absorb the food, and to put down quantities that normally I wouldn't be able to hold at all? I had recently committed not to purge/use purgatives, and perhaps there was a rebound improvement in absorption because I wasn't volitionally disrupting absorption all the time. But more to the point, it seems like rather than ferry calories out of my system, the cyclodextrin was binding up something in such a way as to enhance absorption of calories. Either

I'd be grateful for other ideas on the mechanism of action here from people smarter than myself.

But the reason I'm sharing this is because there must be a situation in which it's desirable to get nutrients/energy into a cachexic body that isn't abosrbing them well. Perhaps introducing this sort of fiber along with normal diet would enhance absorption and appetite. Perhaps--and we'd need to know more specifics about fiber-bacteria interactions in this case--it might even be useful therapeutically in remediating/correcting the balance of bacteria in someone's colon. (In my case, I fasted for two weeks and lost no weight but regressed several months of gut healing and am now about back at baseline in terms of digestion/absorption but unhappier about my weight, so I can't report on long-term gut-therapeutic effects of this substance.)

I also wonder if it might be used to bind out toxins, like olestra was shown to do in the "Pringles study" about a year ago, and olestra only blocks the fat-digesting enzyme, lipase, not the fat itself.