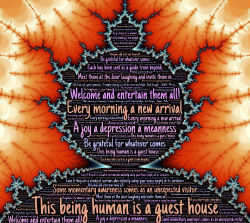 Today, December 17th, is the 742nd anniversary of Rumi's death. The Sufi community celebrates loved ones' or heroes' death days, or urs, with informal but intentional gatherings in celebration of the life and to reflect on how that life lives on in our own lives. So tonight was different from the normal Thursday night Sufi gatherings.

We shared our favorite Rumi poems, we squeezed a couple of Dances of Universal Peace into the narrow confines of the Little Chapel, we did a couple of zikr practices and a carefully contained dervish whirl.

Interesting to reflect on Rumi's perennial appeal and what an apt representative he is of what we call Sufism.

Sufism--often considered the mystical branch of Islam and/but its name is Greek in origin, from sophia, "wisdom."
Islam is a young religion, established in the 700s CE, but Sufism is said to go all the way back to Zoroastrianism in the 500s BCE. Rumi, 1207-1273, is currently America's most popular poet.

"Rumi," by the way, means "Roman," which is how the Arabic-speaking world referred to the area of the Byzantine (formerly eastern Roman) Empire, including Anatolia, where Rumi came from. So, an eastern religion called by a Greek name; an ethnic Persian known by his homeland name with "Roman" referring to Greek overlordship of what is now Turkey...

Many Americans are afraid of or put off by Islam--even highly educated people who should know better--and yet small Sufi communities thrive all over the US (there are three different Sufi orders active just here in little old Tucson), and many Sufi initiates adopt a Sufi (Arabic!) name and use it in their professional and personal lives.

(Point of information: I don't have a "Sufi" name,  just as I didn't take a rainbow name when I lived in Hawaii, because it's clear to me that the name my parents gave me is a spiritual/initiatory name in its own right.) I am the only person among the Sufis in town here who actually has Middle-Eastern blood. But several are Jewish, and although at the moment everyone is Caucasian, there is some diversity of background.

Islam in the midst of middle America stealthwise? Not really. If anything it's the other way round, sowing the understanding of all the many good qualities of Islam and of that part of the world, showing how these can be integrated into middle America or elsewhere. But most Sufis are just good, sincere people earnestly following their spiritual paths. They use Arabic words in their practices without necessarily understanding them or being able to pronounce them correctly, and many of them know little to nothing about mainstream Islam.

Sufism isn't really a religion: it isn't organized, you can become a Sufi and continue to go to church or temple with no inconsistency; its foundational principles of love, harmony, and beauty speak for equity, tolerance, compassion, and a sincere intention to rise above divisive differences toward what unites.

Honestly, most of the time that I'm engaged in Sufi practices I'm not thinking about Rumi, although it's also true that reading poems of Rumi or Hafiz or Kabir feels like the most soul-satisfying delightful culmination of Sufi practice and I wish I spent more time on it. Conversely, I often find myself understanding Rumi and Hafiz and Kabir better as a result of practicing Sufism. But so much to say, "being a Sufi" doesn't mean just sitting around consuming Rumi memes.

Once a poet or thinker becomes meme fodder, the question has to be asked whether most people who know of them actually know anything about them. How many people who quote "let the beauty of what you love be what you do" even know that Rumi was a Sufi, or what a Sufi is/was?

When I was growing up, Rumi and Hafiz were almost synonymous with Sufism, but now? Well, one thing now is:
Rumi Barks
Not howling at the moon; nowadays, in the English-speaking world, Rumi is all but synonymous with Coleman Barks, whose English versions produced in collaboration with Persian scholar John Moyne represent the vast majority of Rumi exposure. Everyone who read tonight was reading Barks's versions (yes, myself included).
I love Bark's Rumi. I love how Rumi Barks. But I grew up with another translation in the house too, an older one by Reynold Nicholson. And, as a professional translator myself, I can tell that the Nicholson is more accurate--likely closer both to the letter and the spirit of the "real" Rumi.

Turns out there's actually a website pointing out errors and misprisions in the different translations and versions of Rumi.

What matters? Death prompts a celebration of life.  What's in a name can be both more and less than meets the eye. Much is lost in translation, but the losing can also create captivating and ecstatic poetry in its own right. Many people don't miss what is lost. Some of us miss it and need to rescue it. There are spiritual paths there for good-hearted people to follow. My lonely furrow probably needs to include more of the studying piece and picking up of what was lost in translation.