Starting the Gong--Cycles Within Cycles

a buddy system for days 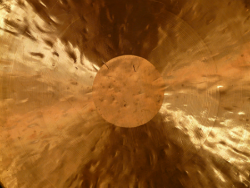 When I awoke yesterday morning, it was to a sense of anticipation, a little apprehension, and determination.

It's wise to have interim milestones and checkins during a period as long as 100 days, acknowledging the smaller cycles within that time frame. This time around, I've recognized the importance of that. A buddy system for days!

Every individual day is its own cycle, and I have daily practices as part of the gong. And then we have the cycles of weeks and months, which sort-of-but-don't-quite map onto solar and lunar cycles.

I've instead gone with my own numerology, which of course turns out to have its own resonances from long ago. "My" numbers are one, three, and nine. Obviously, "one" is each day. Then, within the 100 days I've chosen to have eleven nine-day cycles, each nine divided into three sets of three days (just like my three-sentence, nine-word mission statement). (Yes, that makes a total of ninety-nine, and it's good and traditional to have an additional "one"--the leap year, the shamash ("server") ninth candle for Chanukah that lights all the others.)

And wouldn't you know, (well, I did know): in ancient Rome, the interval between market days was called a nundina, which means "nine days" (although theirs was eight days counted inclusively, so there was a word all ready for me to use for these slightly elongated weeks.

Part of why this feels good is that it's an overt acknowledgment of the cyclic nature of life that a gong is supposed to help align with. But I also love the image of the three days standing surety for one another, as buddies. In three-day tasks, it doesn't matter on which of the three days I them.

In the Jewish mystical tradition, days are considered to have life and entity of their own. Each day that a person wakes up is sent to them as a gift to be cherished, honored, and lived up to. And days bring different challenges; it's not always equally easy to honor and live up to a day.

But now, each of my days has a vanguard and a rearguard. Not only does this mean that one day can be redeemed by its neighbors; it also means that each day I must do my best, not only for that day but also for the days that surround it.