The Silk Road Comes to Tucson 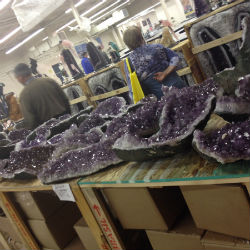 Every year from January 31 to February 15, Tucson plays host to an international gem show. I knew this before I moved here, but more as a fairytale, almost, than with any real sense of cognition around it. After five years in extremely white-and-homogeneous Homer I appreciate how international Tucson is in and of herself. And she's definitely rich in gems, metaphorical and literal--petrified wood, wonderful quartzites and schists.

But for this two-week period a whole separate reality plays out in the convention centers and hotels, the motels that line the Interstate 10 frontage.

I imagined I could easily miss the whole thing by simply sticking to my routine, such as it is. But over the weekend I had the opportunity to be a fly on the wall at one of the convention centers.

It was as if the Silk Road had been transported to the Southwest.

There was everything from the roughest-hewn rocks... 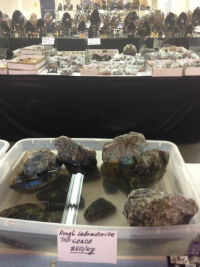 ...to the most exquisitely finished stones, carved, shaped, and set in designs innovative and traditional. 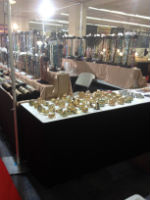 There were geodes taller than me--huge clefts of amethyst crystal. 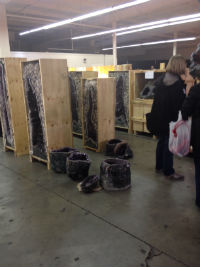 Imagine what a sarcophagus that would be!

And of course there were regular-sized geodes too, and smaller and more/less polished ones, including unbroken geodes for sale for the recipient to smash for themselves. 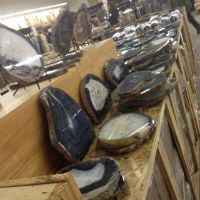 There were $1 rhinestone keychains, and there were entire rooms under lock and key, for dealers only, $300 minimum purchase. There was shiny stuff... 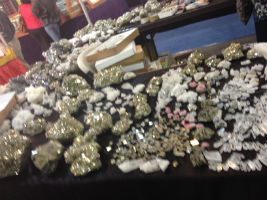 ...and some beautiful things done with minerals and light. 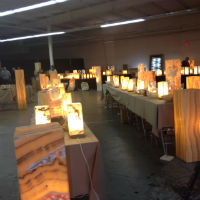 The most interesting thing of all, though, was the people. The collective body, and all the individual bodies. People of all ages, shapes, sizes and nationalities. A symphony of different languages. Geographies mapped onto the convention center's rooms--a whole area dedicated to amber, where the stallholders were all Polish or German or Slovakian. The big geodes and giant sparkling rocks took up a wing where everyone was Brazilian. Turquoise in so many grades and shades in a middle aisle curated by Iranians and Armenians and Turks. Tibetans and Nepalis with singing bowls, cashmere shawls, mala beads and buddha statues.

The signage was haphazard throughout, and something that cracked me up from the get-go was that the aisles were all designated "isles." Little isles and continents in this one arbitrary location.

Signage is part and parcel of my pleasure in gems and crystals, as distinct from my pleasure in rocks. When the printed label names the gem, especially when it also tells country of origin, healing properties, or any story, it draws me to linger with pleasure. Sometimes when I find rocks, I make up stories of my own for them.

In the "isles" of the convention center, every human being also bore a label containing their name, the company they belonged to, and whether they were an exhibitor, a buyer/dealer, or a guest. And oh, I could have walked around all day impertinently interrogating people's labels, from Wilson to Shah, from Consuelo to Chang to Xaverius, from Khan to Kuyumculuk, from Vera Wolf to Vartanian, several native Tucson vendors  ...and a couple from Seward, AK, whose designs I recognized from the artist co-ops in Homer. 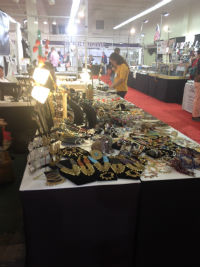 I love the names and the labels. They're truly my candy. And the fact that both the objects--the jewels that everyone wanted to sell or buy--and the people--exhibitors, buyers, guests--were labeled--showed me that both objects and people were on display, and that both objects and people are endlessly fascinating and precious. This is "pietersite," from somewhere in South Africa--pleased to meet you. And this is Tenzin from Tibet, who speaks remarkably good English and is eager to sell you a singing bowl. Pleased to meet you too.