The Sufi's Deathday as Divine Marriage

god is love, lover, and beloved 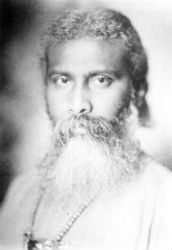 Eighty-eight years ago today Hazrat Inayat Khan died--inspired musician, messenger of the divine, and bringer of the Sufi message to the West.  It's a day of celebration, called Urs, which is nothing to do with bears but literally means "wedding anniversary."

The death of a Sufi saint is understood as the transmutation of their physical existence into union with the Divine. (It's interesting that early Christianity had this metaphor also, although in that case Christ was the bridegroom and the Church, the collected body of worshippers, was beloved bride.)

What I appreciate about the metaphor of marriage between departed saint and God, aside from the gender-neutral conception of marriage contained therein, is its reciprocity. By means of the marriage--a union--not only is the saint taken closer to God, but God is brought closer to the world of the saint--whatever God means, whatever the world means to you. You are "this" close to the divine--and to death.

As a young person, I wasn't aware that Hazrat Inayat Khan had founded the Sufi Order International, an organization of individuals sincerely devoted to bringing peace and understanding to humankind through love, harmony, and beauty. That said, I might not have been surprised to learn that I would find and join this organization as an adult.

I didn't know his affectionate nickname of Murshid--teacher--back when I was a teenager, but Hazrat Inayat Khan was an inspiration for me. At the time, I was a very precocious, serious, and sensitive musician who wanted to know the divine. And he had mastered the world as an instrumentalist and then left his music behind to share the divine message with the world.

His formulation of that message is studded with music, and that's why books by him piled up beside my instrument cases and reedmaking supplies. It's a message of practicality and common sense (which may not be so common). A lot of  what he says is unconsciously echoed by all the modern self-help gurus. "In the beginning was the Word," and his sound-oriented approach, I think, is at the heart of this practicality.

Pay attention to a person's vibrations, both the sounds they make and the more subtle movements. Recognize the attunement of each individual and meet them where they are. Listen to the voice of the flower. Repeat the name of the beloved over and over, and deepen your experience of the beloved in so doing.

There's a wonderful database of his writings here.

This evening in honor of his Urs we had a universal worship service, a concept that he introduced as part of Sufi practice. How appropriate that our venue was the Little Chapel of All Nations on the UofA campus.

We read short passages from scriptures of all the major and some minor religions. We said the prayers Murshid formed for Westerners. Honoring our individual paths, we each had the opportunity to share a story or reading. We even got to hear two short recorded clips of Murshid speaking and chanting. Even on the unstable early-20th-century technology, which spun an improbably high-pitched reproduction, what a beautiful, resonant voice.

It's a precious paradox that coming together to remember the death of someone made that someone feel more alive as a presence within our lives, and that focusing on remembrance and the past sent me away with a gently enhanced sense of self-assurance to move forward into tomorrow.