The Yang Within the Yin 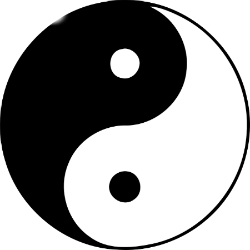 I mentioned that I'm gearing up to start another 100-day discipline practice on the Solstice, December 21st, and I'll share much more about that in the next few days. Meanwhile, I've been meditating on the interplay of Yin and Yang a lot--the beautiful symbol, and the many ways it plays out in life and health.

The little white circle in the black, the little circle of black in the white: each extreme contains the seed of its opposite. The utmost expansiveness (yang) is the apex from which contraction starts. The utmost contraction (yin) is the pinch from which expansion opens.

The Winter Solstice is the longest night, the shortest day, the time of greatest contraction--the inmost, Yin-most time--but also the anticipated day from which time every succeeding day  is longer. In Alaska at that time of year, the change in daylength wasn't even subtle, you couldn't help but notice it.  For the rest of my life it'll remain a lesson  in how our Earth dances with the sun (and what happens to water in between, but that's another story).

All this makes the solstice a great time to start a discipline practice. We start from a point of stillness, we get clear on what we wish to create, we move toward expansion and fulfillment. This year's solstice also happens to be a new moon, which heightens the "yinwardness."

I'm asking that this energy flow help me in my intentions. I've tended to be confused and unworthy in setting goals, sort of halfhearted and not trusting myself or my deservingness. But my previous 100-day practice has given me some clarity, even if I was wishy washy on goals during the practice itself.

But there's another Yin-Yang area I need to mention here too. In Chinese cosmology and medicine, the organ systems of the body, and the meridians (energy pathways) with which they're associated are paired into  yin and yang organs. Yin organs hold, and yang organs move. Yin meridians move from the center of the body out toward the fingers, where they meet the yang meridians that move inward toward the center.

They also have associations with seasons, elements, and times of the day. Winter is bladder/kidney season, with the element of water, late afternoon.

But the pair of organs I've been fascinated by lately is lung/large intestine (metal element, autumn season, 7-9am).  Lung and large intestine aren't as obvious a pair as bladder/kidney or gallbladder/liver. They're dealing with different things. But, after the skin, which happens to be the "tissue" associated with Lung/Large Intestine, they're the most important excretory organs. The lungs release stale air. The large intestine, well, you know. ..

I've spent too much of my life miserable about my large intestine (although really, with celiac etc., the small intestine is the culprit), and looking through the lens of the lung, yin to large intestine's yang, has been so helpful.

I should have noticed it before! Slippery elm, which has been one of the most helpful herbs to my gut my whole life (except when I forget or feel guilty, because it's somewhat endangered), is a known soother of the digestive tract, but it's also perhaps even more commonly known as a lung/respiratory tract soother!

With the abrupt shift here in the desert from very hot to very chilly, I've had the glimmer of a cold. I've been working with apple cider vinegar and a tiny amount of honey (those two alone got me through college in a damp climate) with specific lung/cold season herbs: horehound, yerba santa, elderflower, astragalus, among others.

Lo and behold, these herbs also seem to help with my downstream digestive tract. Many of them are great for the skin, too. I love working with herbs!

Part of me wonders whether my mapping of "lung herbs help large intestine and they're matching yin/yang" is just fanciful since, as I said, the real locus of my problems is small intestine. But in terms of the subtle energy meridians, the large intestine pathway and energetics are definitely in play. "Large intestine meridian" doesn't literally mean just the colon.

And, in this world where it's now recognized that placebo, nocebo, "try this out," and "we really don't exactly know what mechanism's at work" are perfectly acceptable attitudes toward healing, I'm happy to say it doesn't matter! What does matter is that the seed of its opposite is in any action.

And in that off-balance balance, like the one we create by walking, we can have the experience of healing, in the sense that healing="making whole."