Given that I learned to honor and take care of myself in the thick of working all day long helping others with their health, I was aware of the danger of falling back into old habits once that structure and motivation were gone. My intention was and is that the clinic experience was transformational for me in this respect; although I’m not working at that pace right now, I’m holding the space and entrainment to continue to work with people, at that degree of intensity when necessary.

So here are some of the ways I’ve been continuing to take care of the sacred vessel; many of these will merit follow-up posts of their own.

First of all, I commit myself sincerely and fully to the recognition that I am worthy, that I am here for a purpose, and that I no longer need to be in poverty. I remind myself of this commitment daily, and I trust that the financial resources follow.
Then, the two main practical categories have been setting up my space so that it’s more comfortable and functional, and ongoing activities/practices.

It’s ironic: until a week ago last Thursday, I’d spent very little concerted time in my “monastic cell” since I moved here at the end of last October, because I was at the clinic much of the time. The day I came home was Tucson’s first 100-degree day this year, and this space is a little cement box that can very easily be cold in winter, hot in summer. 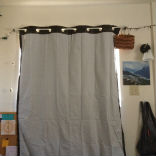 I’m totally impressed at the difference that’s made in the temperature here. When the sun is really hitting the east side in the morning, the west side late afternoon, sometimes even the inside of the front or back door is almost too hot to touch. Before the blackout curtains, the blinds would merely filter out some of the light, but the space would be furnace-hot.

Along the same lines, I got an instant screen door for the back door so that, except in that late-afternoon slot, I can keep it open whenever I’m home without having to share my space with winged biters. 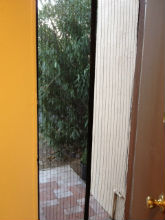 This screen door, by the way, ships with adhesive velcro strips to attach to the door frame. Whoever’s idea that was, they are a hopeless optimist, and it’s fortunate that they have a more realistic coworker who includes a box of tacks in there too. How long do you suppose velcro will hold up a screen door with a person pushing through it a few times a day and several hours of direct, intense sunlight?

Maybe one day? Still, I let myself be optimistic and waited a couple days before tacking it to the frame as I should have in the first place.

I also got a filter for the shower.

Between the curtains, the improved airflow with the open door and turning on the ceiling fan, cool showers, and minimal stove use, I’ve barely had to turn on my swamp cooler, even on the hottest days!

Aside from enjoying the frugality and environment-friendliness, l find these little improvements make my space much more pleasant, and I hope they just constitute “favorable conditions” in which to continue my ongoing creation of myself as healer through explicit activities and practices.

The first, foundational practice this last week and a half has been sleep. I’ve been sleeping in later if my body feels the need, going to bed early; I’ve even taken a couple of naps in the daytime, a practice I’ve long seen the utility in but never acquired myself.

Next is meditations. I maintained a basic meditation practice throughout those busy months (again, sine qua non), but now I’m doing a much fuller set of Sufi meditations and prayers, and other valuable meditations.

Closely allied is movement practice. A basic skeleton of this along with basic meditation was part of my essential morning routine the whole time I was busy, but now I’ve gone back to at least 25 minutes rebounding every morning, and I’m getting some walks in too. 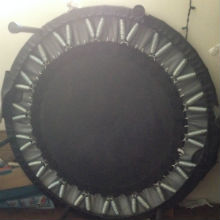 Two things most people at the clinic benefit from that I didn’t have time to do: (1) I got a colonic! And will be getting a couple more! The ladies at Desert Therapy are seriously wonderful. I was so happy to leave behind some ropes of mucoid plaque and all kinds of liver flukes, and also to see no sign at all of candida.

And (2) transdermal magnesium therapy with magnesium chloride flakes. I mix mine relatively dilute, so that I don’t have to shower it off right after; I anoint myself all over from the neck down 3-4 times during my morning practices. I’ve also been splashing this brine into my water and food. Muscle cramps are gone, and clarity is enhanced (by this along with everything else).

My hydration/food/supplementation piece is also crucial and merits probably several posts in its own right. As basic as drink and food are, this piece feels somewhat new and precious to me. After constant experimentation and a lot of frankly self-destructive practices around food over the years, I’ve had a fairly clear idea of what sort of things work for me for about a year and a half. But it’s only in the past couple of months that this has really started to feel “dialed in.”

I’m eager to protect this “dialed in-ness,” because it’s so different from the years of torment I’ve experienced. Although I encourage most everyone I work with to aim toward a level of flexibility in their nutrition (with sensitivity to their current state of health which might make them less resilient to really big deviations), it appears that I really do need a much stricter plan than most. This is ironic after all the years of extreme anorexia, strictness/re-striction almost unto death--there was a seed of right in that protectiveness-turned-destructive!

That’s part of why the recent bout with bulimia was so horrifying--aside from the obvious immediate physical distress caused, I had clarity at a deeper level that, more than most, I don’t have the leeway to tax my body in those ways.

But at this point, I’m choosing the strict plan out of self-respect, no longer out of fear. And it’s working for me, because my bipolar symptoms are under control--without the medications!!! Even if I didn’t have the intention to keep my sacred vessel primed to do more of the work I’m called to do, just the fact that I’m not at the mercy of bipolar and anorexia is motivation to keep doing what’s working and give thanks and celebration every minute of the day. More on this wonderful, gladsome development to come soon.

Written by Ela Harrison on Monday, 23 May 2016. Posted in WholeHealth, Ela Recommends, Mindfulness