What is a Key? 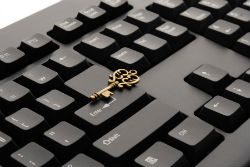 Have you ever felt your fingers typing away on a keyboard, watching the words and occasional typos show up on the screen, and thought how no words would appear if there were no keyboard under the fingers? That "typing" would be mere tapping without the keys, but that you could make exactly those movements of your hands, with the same intent to send words and sentences to the screen, mapping the qwerty-map onto your knees or a tabletop?

If you hadn't thought of it already, you'd be likely to think about it if you found yourself typing on a German keyboard, for example, where the y and the z  have traded places, or a British English keyboard, where the @ symbol and the double quotes " have traded places vis-a-vis the American layout. (And the potential for other keyboard layouts, such as dvorak, is another whole story for another time.)

Yes, you hit a real key on a real keyboard, you weren't tapping your lap, you weren't making a typo; you really meant to hit the key that you hit, but instead of the intended y you produced z; instead of closing a quotation you produced what in Hebrew we call "shtrudel" @. I hit those keys; I find myself back in college philosophy, studying problems of intentionality, agenthood, identity, and meaning.

I teeter on the edge of that rabbit hole, inhaling the damp air of my Alma Mater and the book-filled rooms, and I go back to chasing words around.

Keyboard. Not such a new item, clearly named after the keyboards of musical instruments. I've always thought the Italian tasto for "key" and tastiera for "keyboard" makes much more sense, as it derives from a verb meaning "to tap away, to touch repeatedly in order to figure something out." In Italian, the word for a key to a lock or a map or even to a musical scale is a different word with a different concept. German manages to keep them separate too, by borrowing the Italian word.

Otherwise, European languages all the way back to Latin (which was widely in use when keyboard instruments were developed even if not when the typewriter arrived) tend to do like English. A "key" is something that unlocks a physical object, provides the pointer to the solution of a code or schema, represents the fundamental concept that makes understood all other relevant concepts, designates the tone on which a musical scale is based, and is the button or ivory-clad wooden lever that should produce a certain letter on screen or sound from a musical instrument.

That's a broad swathe of things to share a word, even before we consider that the physical door-opening key was made of all kinds of wooden and metal materials and can now also be a credit-card-sized swipe, and can now even be your own phone (how's that for confusing referents?) Or try car keys--many cars now open keylessly but require a key to start the engine, a different kind of unlocking. And even newer cars are dispensing with ignition keys too.

Still, Socrates would probably have been comfortable with the metaphorical relationship between a physical object that opens something previously secured closed and a conceptual idea or piece of information that opens up someone's understanding of an image or an idea.

A keynote, whether it's a lecture or the tonic of a muscial scale, sets the tone/sets up the framework within which what follows should be understood, and so it opens up interpretation. A keystone by its very position dictates the shape of the arch. I don't think it's a stretch to see this as another form of opening up/unsealing--it makes possible the experience of the construction. It also opens up the arch literally, in that the sides of the arch expand away from the center.

Well, one more thing about all the other keys is that generally (nothing's "always"), there's a one-to-one relationship between a key and the thing it opens/the idea it clarifies/the tonal scale it demarcates. And so perhaps there seems to be with the keys I'm typing on right now, or the shiny keys on a saxophone. But these don't have that one-to-one relationship!

Simple harmonics dictate that the same keying on wind/brass instruments can produce several notes (at the same time if you're good) depending on how they're blown. The multitude of notes to be played with ten fingers also dictates that each key has a multitude of uses, even if a key is colloquially called "the F key" or whatever. And this whole chasing after the word key started from my musing over the fact that I can hit a key and have it produce something quite other than I intended if I'm not in the expected keyboard layout.

Since having this little game of chase "key," I am practicing awareness of the keys as I type, fast though I type, and inviting each tap or type to be a call to the present, a foundational understanding from which to open up to what is.

Written by Ela Harrison on Saturday, 12 December 2015. Posted in All About Words, Mindfulness