"in tune with the Infinite, in rhythm with the Finite" 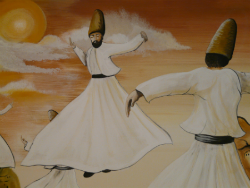 It's natural, almost cliche', for a writer to be drawn to Sufism. For most of us in the West, "Sufism" means Rumi and Hafiz, two poets of ecstasy and beauty. I've loved those poets since my childhood too, but I was also lucky enough to grow up in a house with books by Idries Shah and Hazrat Inayat Khan among other Sufi thinkers. And I'm a Greek geek of all things etymological, so I was quite young when I recognized that "sufi" is a Semitic pronunciation of "sophia" and allied words--that this is a wisdom religion, forged at a time when there was crosss-pollination with the Greek-speaking world.

I would use this Greek link, as well as the label of "mysticism" to soothe my anxiety (as a Jew/Israeli) over the connection between Sufism and Islam. Later, the beauty of the Sufi message led me to read the Qur'an also, and to recognize that Islam isn't all jihad and forced conversion and polygamy, just as Judaism and Christianity are not those things.

Since moving to Tucson, I've been welcoming Sufism into my life beyond the books. Right here in town, there are regular meditation groups. There's monthly Dances of Universal Peace. There are weekend retreats. They take place at people's homes, dance halls, event spaces, and they all end with hugs. They're organized events, and some of the attendees have taken Sufi names, but it doesn't feel like "organized religion."

The recurrent message, the underlying theme, is "love, harmony, and beauty." The prayers and practices are all aimed at seeing the divine in everything and everyone. Another way of saying this: rising above apparent divisions and distinctions, to be in a space of compassion, forgiveness, understanding.

Everyone knows the image of a whirling dervish, body spinning ecstatic, right?

I used to covet "mysticism" as a wonderful hiding place, all ecstatic poetry and being relieved of my body. But I've been learning that "mysticism" is grounded, through the body! Many of the practices involve movement, dance, song, toning, breath awareness.

The way out is through. And I confess that some of those sounds and practices, resonating in the cavity of my body, have kept me in meditation where mindfulness would have sent me off down some cloudy cul-de-sac of the mind.

Hazrat Inayat Khan (the founder of the Sufi Order International) was a musician himself, and that's what drew me to him as a precociously musical teenager. His characterization of how a person should be in the world has become a touchstone for me:

"...to be in tune with the Infinite and in rhythm with the Finite."