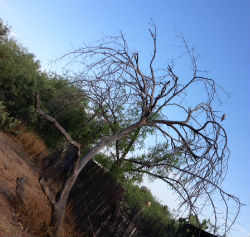 My dry yard is feebly dominated by the standing carcass of a wild olive tree. An oleaster, I guess it would have been called. I've seen my neighbor's cat get up in it, but mostly it's a perch for birds, and those mostly doves.

Doves and olives together--symbol of hope since the time of the Flood, when the dove brought back an olive branch to the survivors of the human race in their Ark, a sign that there was dry land (with trees on it) somewhere in reach. The olive branch was a symbol of peace back then all over the Mediterranean and Near/Middle East.

And the doves, ubiquitous pigeons?

They bond monogamously for life, and they're highly territorial and competitive--not what I usually think of as peaceful (what does that say about monogamy, we wonder?) I'm guessing their incorporation into peace symbolism was facilitated by the olive branch connection with Noahs' Flood plus the image of the Holy Spirit descending on Jesus in the form of a dove, described in  all four gospels.

As for why that symbology, I'm not going to speculate. I'm already so far into digression...

The mourning doves and the regular doves and the pigeons--this time of year they coo almost around the clock. Insistent, repetitive, perseverant--tune them out, or maybe you can't. These days it's heading toward 90 degrees by 8am. I'm up hours before that, watering my plants while there's still a chance they'll soak some up, and then meditating on my back porch.

I meditate with the cooing as counterpoint, and honestly my own monkey mind is usually more distracting. This morning,  meditation came eyes wide open, as I got to eavesdrop/eyesdrop/be a fly on the wall for bird sex. When you're rapt in something, watching it with your attention undivided, that is focus. That's the clear cleanness of concentration toward which I'm riding in meditation.

A dove swooped in, wings chirring, to land on the wild olive. Then, chest puffed out, it cooed, its whole body puffing like a bellows. While it cooed, it rocked back and forth on the branch, fanning its tail and sticking its butt in the air.

A few moments later, another dove swooped in and landed beside it. The first dove hopped on top of the second one and repeated the rocking back and forth movements on top of it. There was a moment where they had to catch themselves having almost tipped over backwards. By the time dove the first hopped back off dove the second, the latter looked disheveled and unkempt and actually smaller than it had originally appeared.

But a moment later, shrunken/disheveled dove the second pulled itself together and hopped on the back of dove the first, and they rocked back and forth that way round for a while too. Dove the first was a little bigger and didn't seem to get shrunken down in the same way.

They went for a third round in the original configuration, dove the second getting disheveled again, and then they both flew away.

Around here, doves are notorious for building very messy nests in very dumb places, like on stored ladders, or in a gap in a door lintel, or in a light fixture. I'll be keeping a lookout for one now. Interesting that their sex was equal opportunity in terms of both getting a turn on top. Both members of a dove couple also take turns sitting on the nest, and both create "crop milk" (that's crop as in the part of a bird's anatomy from which it can regurgitate, not like rice milk!) with which to feed the babies.

Speaking of nests/reproduction, wildlife, and meditating, another time meditating on the back porch I noticed a yellowjacket the size of my index finger was building a nest in the wall. Quite an impressive cement job it was too. I did remove it, and I'm grateful for meditation drawing me to notice it so that I could remove before it was full of index-finger-sized yellowjackets!

One final piece of animal sex, but this one's from captivity. My mom and I happened upon these lizard lovebirds in a pet shop window in Israel.

My mom, who never ever talks about sex, and I, mostly ditto, stood there on the street and laughed at those lizards for probably five minutes. Laughter, once again, completely in the moment, destination of train meditation.