Book Review: A Philosophy of Walking

do more of what you love 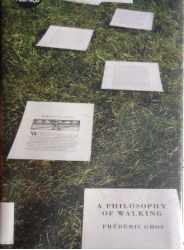 Moving out of gratitude... Right before Thanksgiving I completed a 100-day practice of discipline, about which I'll say more soon. Most crucially, it was a vehicle for me to really privilege my sleep and to establish a sine-qua-non morning routine.

I'm preparing to start another on the Solstice, so I'm reflecting on the experience  in order to decide what to undertake for those 100 days. One hundred days to build something meaningful! Grand, right? Something meaningful. Exploration of life purpose. Something I've been neglecting and would like to do more of is writing book reviews.

Here's one for this week, and maybe a regular stream of them starting on the Solstice. Let's see how it goes.

A Philosophy of Walking

(Marcher, une philosophie), by Frédéric Gros, translated by John Howe. Called a philosophy, this lovely book could just as well be considered a series of lyrical reflections on the relationships between human being, nature, creativity, and how walking deepens and defines these relationships.

Opening with the definitive "Walking is not a sport," Gros then examines the sorts of things that walking is and does,  including a spur to creativity, aimless stroll, escape, pilgrimage, rhythmic movement leading to mantra and spiritual unburdening, the balance of imbalance from one foot to the next, shedding of encumbrances and discovery of the essential, marching as civil unrest, return to childlike wonder, invocation of the sound of silence, eschewal of "civilization," embracing of civilization, experience of nature anywhere and everywhere. The only type of walking frowned on and dismissed is the affected strolling in public gardens (like the Tuileries)--the "going to see and be seen and keep rendezvous while pretending chance encounters" that is completely out of keeping with the sincere and innocent spirit he's describing otherwise.

Gros intersperses his own reflections with stories of famous walkers from literary history, in particular, Nietzsche, Rimbaud, Rousseau, Thoreau, de Nerval, Kant, Gandhi, the Greek philosophers (the Peripatetics, you'd think, but he focuses on the real wanderers and rejecters of civilization: the Cynics), and a little also on  Wordsworth, with the book ending with the mysterious figure of the Tibetan lung-gom-pa. The stories themselves are interesting as an intimate look at these figures from this specific perspective, and the interweaving of story with lyrical reflection holds the reader's attention.

A small caveat: it's translated into British English, and there are just one or two idioms and words an American-English-speaking reader might pause at. Ever heard of "clobber"? It's a wonderful slang word for miscellaneous equipment/impedimenta/baggage. Other than a few Britishisms, which is no kind of complaint, just warning for American readers, there were really no more than two places that I could precisely imagine what the original French would have been and thought might have been rendered better.

It's not a long read, and it's not encumbered by massive notes, but each chapter has a "further reading" section, including several books I'm eager to check out.

As a girl reader, I couldn't help but notice that the book is overwhelmingly populated by male characters. It could be my naivety, though, but I never felt excluded by that. A conversation for sometime, I think.

I started writing this review, then stopped and went for a walk. Quite appropriate to the book. Even more appropriately, I listened to a couple podcasts as I walked, but then I turned the phone off, took out the earbuds, and walked quietly, as quietly as suburban commute hour and neighborhood dogs allowed.  My own-life application of this book: as I continue to explore how to improve my "production-to-consumption" ratio, I see myself turning off the podcasts more often for my walks, perhaps keeping the phone at hand in voice-recorder mode instead.