Going Out To the Back of Beyond

An Interlude (sort of) 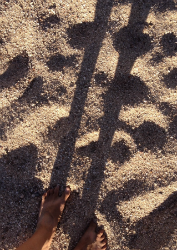 My “monastic cell” abode is a little cement box. As a friend put it, “the Tucson broiler is now on.” 100+-degree days for over a month and to be continued through perhaps October, with occasional monsoon reprieves. I don’t turn my cooler on during the day, and it’s not a very effective cooler anyway. Even with blackout curtains on the windows, it’s often in the 90s in my home. Outside, suburbia stretches its grid, curvaceous and eccentric and still a grid. I walk. I miss the easy reach of the Rillito wash I had from my old place, a small strip of wildness and growth to walk to and poke around almost every day.
I lift up mine eyes unto the hills.

This sprawl of city is surrounded by mountains--the Catalinas, the Rincons, the Tucsons, the Santa Ritas. If you drive up to the 9000ft summit of Mount Lemmon, you pass through the range of bioregions you would traverse between Mexico and Canada--all that latitude compressed into contours. There’s even a spring at the top.

And finally, I head for the hills.
This post is not about ketogenic matters, except in a way it is.

Self-limitation: I knew Tucson would be rather “big-city” for my wilderness heart, especially having spent most of the previous decade living in tiny towns or actually in the jungle. I projected it would be okay because you can look up and see the mountain wilderness from anywhere in town. The problem is getting to it. I, who can get in my car and drive to the wilds, am constrained by the sense of ancestors who could not do so. I had to justify the gas.

Atrophy: Those months I was working all hours at the clinic, I barely got out into the wild at all, and the person who was advising me counsels against going out in the sun at all, period. Working out of the home again now, sitting and sweating, view foreshortened by the curtains and little to see beyond them anyway, I was missing the life cycles of the plants and the process of visiting and gathering them. I don’t feel fully engaged with the plants if I’m never in their habitat.

Ascent: I got over all my excuses and yes-buts, and I’ve been to the spring at the top of Mount Lemmon twice, and last week I went several miles into the backcountry, just myself and a bottle of water and my phone (in airplane mode, no signal out there) to take a couple pictures with, and a bag to carry herbs home.

Sunflower Spring, also called Quartzite Spring, is pretty much as described on Findaspring.com. It’s all the way at the top of Mt Lemmon, past the ski resort, park in the last parking lot before the observatory. A spur trail from the back of the parking lot leads around the caged power transformer to Mt Lemmon Trail #5.

The spring is only about half a mile (not a mile, as some reports state) down the trail from the parking lot, and you can’t miss it--the spring itself is sheathed in a metal shed (more’s the pity)(a new meaning for "watershed," haha!) on the uphill side of the trail... 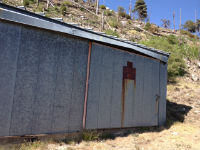 ...and the outlet pipe is on the downhill side. 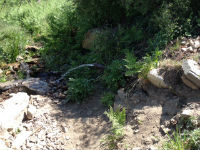 I don’t know if this distance from the spring to the pipe is the reason that the water isn’t as cold as you’d expect spring water to be.

Lots of monkeyflower in that wet environment around the spring, and lots of dock. Wild strawberries and raspberries all the way there, and wild geranium. Ponderosa pine and white fir. Different world from down in the grid. 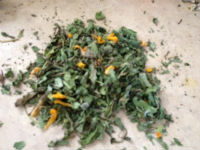 What isn’t stated so clearly in the Findaspring report is that the trail down to the spring is STEEP, especially so in two pitches. This means hiking back up with your gallon jugs of water against some serious gradient. 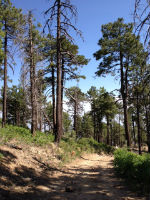 One. Step. At. A. Time.
Breathing that slightly hypoxic air gratefully, glad that the altitude also makes the air significantly cooler. When it’s in the hundreds down in town, it might be in the 70s up there.

My longer backcountry hike last week was out to Sycamore Reservoir, behind the Gordon Hirabayashi Prison Camp (long-since abandoned for such purposes and now a campground) just past mile 7 up Mt Lemmon. It was a couple miles from the car just to the trailhead, along river washes and up to a saddle, where “this side” and “the back of beyond” seemed clearly demarcated. 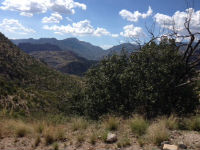 Time of deer, time of lizards, time of plants recovering from a fire, timeless talking time of rocks. Time of serious elevation change, down and up, more of it for a longer period than I’ve done in many months. My unprepared calves were already sore before I reached the dam/reservoir (with very little water in it), which was my halfway point.

My calves are still sore four days later, but I’m looking forward to my next hike already. 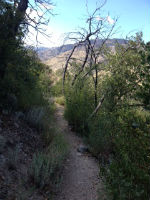 Time of breathwalking, my own pace, watching my exhalations leading, breathing deeply through my nose--out for several steps, then in; sending out exhaust air to create a vacuum for the clean, fueling air to come in. I had the trail to myself, perhaps because it was mid-afternoon and high-90s. That air, though. Far fewer lungs present and breathing. No cell-tower or other electromagnetic frequencies penetrating and permeating it.

I’m so grateful for the leeway of this climate that I could just up and go to the middle of nowhere without “preparedness.” I’m so grateful for the ketogenic way of eating, whereby I’m burning fat for fuel, and I have so much fat stored on my body that there’s no way I’ll run out of fuel on a long hike. I admired how my muscles just went and went, producing their glycogen without depending on metabolized sugar. Later that evening, and even the next day, I was impressed to note that I wasn’t even particularly hungrier than usual. Times past I remember ravenous hunger from long hikes, my body inefficiently trying to run on carbs.

And/but: next time, I will wear a hat, pack more water, pack some basic survival stuff. When I turned back from the dam/reservoir, i.e. at my halfway point, slightly tired and dehydrated, there was a fork in the trail I’d barely paid attention to on the way down. Coming back, it was less obvious which way I’d come from. Less obvious, but still pretty obvious really.

Tired and dehydrated thinks differently than fresh, though. As I hiked back up out of the canyon, tired, dehydrated monkey mind occasionally asked again “what if I’m going the wrong way?” Nevermind answered “You’re not going the wrong way--see, you recognize this, and this; and that ruined building you didn’t notice on the way down wasn’t really visible from the trail facing the other way.”
Tired, dehydrated monkey mind pointed out that nobody knew where I was, that I didn’t have any way to tell anyone (no phone signal in back of beyond), that I had no flashlight if I had taken the wrong trail and it got dark, nothing to keep warm, no food, no more water.
Nevermind reassured monkey mind that the worst that could happen would be an uncomfortable night waiting for daylight and then a return to the correct trail, and that I was on the right trail anyway so this was an unnecessary dialogue. But perhaps it was not unnecessary, since it drew my attention to the wisdom of taking some basic precautions, especially out and alone.