Publication in The Georgia Review

sending words out into the world 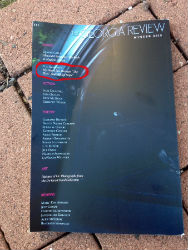 An essay by Ela Harrison titled "My Heart Lies in the Choice Between "The Fleet" and "All the Ships"" appears in the current (Winter 2015) edition of The Georgia Review. Harrison's previous publications have included poetry, book reviews, nutrition and food writing, blogging, and academic writing and translations. This is her first extended essay to see publication.

And what a prestigious venue for publication! Prestigious, yes, but also exquisitely apt, both for the essay and for the writer, as you'll see. Likewise, an apt subject for the first post of 2016 on this blog, with its recurrent preoccupations about words, time, and transition. 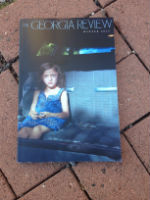 As its title suggests, the essay arose from my experience as a translator/proofreader/preparer of The Brill Dictionary of Ancient Greek based on Franco Montanari's Vocabolario della Lingua Greca. That project, my daily companion for several years, is now "complete," in the sense that the stout hardcover volume is out in the world. Instead of constant companion, a book on my shelf... 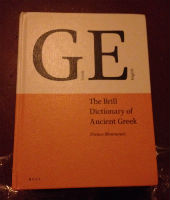 On the other hand, I've spotted mistakes in there, and our era's dual print/electronic publication system gives me hope that the electronic system at least will be a live entity subject to adjustment as necessary and, as such, will never be "complete."

At the time I wrote the essay, which showed up in the Georgia Review issue  in my mailbox yesterday, we were still working on the dictionary, the hard copy of which appeared for me to collect from the post office last fall. The "finished product" (see above for why this is in scare quotes) was on my shelf months before the essay came out in the world.

And that's before we even start thinking about the dictionary's life as an Italian dictionary before translation. Which is before we even start thinking about the words that make up the dictionary, the sentences quoted to illustrate their uses. Did those sentences become scrap paper to swaddle an Alexandrian mummy? Were they penned on vellum that used to be a goat's hide? Scratched on a wall accompanied by an obscene glyph?

"Use your words," some parents urge their toddlers (and others scold that this deprives childen of their nonverbal, nonlinear expressive heritage). Or, if you don't feel like talking you might be prodded, "Cat got your tongue?" It's not a cat, but a  figure lurks in my periphery, surfacing in poems and dreams and finger-points-to-the-moon--a figure who steals the words. Not the books-from-shelves-into-a-sack reverse-Santa heist; more like an incoming tide washing over words carved in wet sand.

Sometimes I think the thief is I myself, Hyde to my Jekyll. When I talk too much, I'm spilling a surfeit of words that I magpied up and had no place sensible to keep. Disrespecting through sheer high-fructose-corn superabundance what I would cherish and treasure were it a single heirloom cob of word-kernels.

Not surprisingly, I feel ambivalence toward the obvious responses to this essay's publication: I'm so proud of this achievement is someone else's framing, is an unacceptably narrow way to view an issue of a literary magazine featuring the works of several other writers and an untold amount of work by the staff at TGR; and since I originally wrote the essay a good while ago, "achievement" doesn't fit either . Finally, my words are out in the world is odd on two counts: first, even when I choose and juxtapose words, I still resist claiming them as my own (even if I stole them). Second, I do believe that my words are out in the world already, some of them stolen and parlayed, some of them escaping the fence of my teeth, as the Homeric bards would put it, more and more of them placed intentionally and attentively like seeds in a row, like water around a tree.

What is not ambivalent is an upswell of gratitude and a sense of harmony/fittingness:
Gratitude that I get to work with words (by which I often mean "sentences"), to help them get to say what they mean at the same time as meaning what their users want them to mean. That's my pleasure and my honor as a developmental editor. When it comes to particpating in keeping alive a so-called dead language, and/or bringing to life concepts and idioms in new cultural contexts, the pleasure and honor deepen into reverence. Gratitude to Brill, whose publications dominated my shelves all the years of my schooling, and especially to editor-in-chief Bas van der Mije, whose supervision and friendship were important contributors to my delight in the work itself.
Gratitude on the creative-writing side: Stephen Corey, THG's editor-in-chief, was my first-year mentor for my MFA at the Rainier Writing Workshop and has remained a very dear and influential figure for me ever since. As part of my MFA experience, I interned at the Georgia Review offices in Athens, GA, and felt like I was doing (one of my) dream job(s) (as I alluded to recently). The essay itself, in close to its current form, was part of my MFA thesis, a melding of poems, essays, and in-betweens some of which are "out in the world" on their own, while others periodically (read "frequently") nudge me to tie them to a pigeon  or ship them out.

Deep gratitude for my connection with The Georgia Review and for my MFA experience at RWW--my two other wonderful mentors, Fleda Brown and Lia Purpura, many other brilliant and generous faculty members, and the assemblage of colleagues, cohorts, friends, blessings--people passionate about writing, people who borrow words and coin new ones too, people who didn't mind having a dumpster-diver of words around, didn't  just think I was weird and might steal their doohickeys. I'm being crass.

I mean to  refer to friends for life, companions, indwellers of my heart and soul, reminders just by their existence that something can be an achievement when it shows up in your mailbox even if you wrote it last year, that it's never too late to write the long-overdue email, that writerly friends are good in the compostable-corn tower but also for car trouble, weddings and funerals, assembling furniture, farming, making tea. The word thief in their midst and simultaneously hundreds of miles/years away. Time? Space?

In their midst the word thief is very quiet. She's remembering how she's told so many people--both people paying to listen to her and innocent bystanders at every turn--that words are infinite and infinitely productive, with cross-pollinations and translations and loans and blends. Words can make new words parthenogetically, or bud them off like strawberries or Bermuda grass, and there's word sex too. No gmo in sight.

Even if she/I steal all the words during a particularly psychotic dream (and these haven't been happening so much anyway), more will grow back, fecund and nourishing like Bermuda grass (which is actually a significant medicine) (this isn't the right place for the Hydra-heads metaphor). Plus, on past form, if I/she stole them all, they'd come spewing back out again like the tide to be beachcombed, gatherered, slicked up, upcycled, used, recreated.

tl;dr: Yay! You're all part of this too. Words are panamorous--we can all have them all. Thank you.