Plant for the Chi-Cross Spell 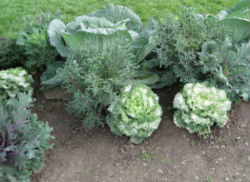 In this spell so far, "it is what it is" is not the whole story, and a chiasmus, like that phrase, is an arrangement in the shape of the Greek letter chi χ, or of the cross.

Nice timing, yes? We're looking at the shape of the cross on Easter. Easter which coincides with Pesach this year, unusually but perhaps unsurprisingly in a year already so replete with astrological coincidences and cooccurrences.

Since the word is chiasmus, "arranged in the shape of a cross," the obvious plant choice for this spell is the family of crucifers, "bearers of the cross," the brassica/mustard family of vegetables so rich in sulfur-containing compounds that sport the cross shape in their structure.

And since the "as above, so below" symbolism of the Cross is all about resurrection--a theme easy to read into the Pesach narrative also, by the way, and since I have to be in five places at once this weekend, I'm resurrecting a post I wrote about the cruciferous veggies for Eighty Percent Raw magazine.

If nothing else, it's amusing to see how my writing style has changed since then. Enjoy!

Here's the article,  Crucifer Crusaders. I can barely believe it's been almost five years since then!

And I'll leave you with a bonus, another plant that appears to bear a cross. This is passionflower, passiflora incarnata. 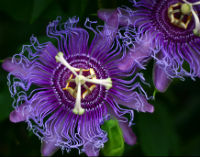 The first time I saw one of these flowers, with its complex central stamens like ornate crosses, its chiffonade petals and royal filigree of purple and gold, it seemed to me like something out of mythology, too beautiful to be real. But passionflower is real, exists in many varieties, and grows in a surprisingly wide range of climates, although it won't produce fruit (the sweet-tart passionfruit/grenadilla/liliko'i) in the cooler zones.

In Thailand, they put the leaves of the passionflower vine in their green juice. The seeds and pulp of the fruit go into drinks and jams... But we call it "passionflower" because the flower is the main draw. It's incredibly attractive visually, and, speaking of "it is what it is, but not really," whereas crucifers are named for their cross shape, the  name "passionflower" takes the metaphor a step further.

The crossed stamens are equated to Jesus' cross, and perhaps the purple and white (higher chakra colors) are equated to the "king of the Jews" moniker Jesus was given at the end there. So, in the  European languages at least, passionflower--passiflora--was named for the events commemorated at Easter: Jesus's suffering and death, collectively named his "passion." ("Passion" literally and originally means something suffered/undergone rather than referring to an intense emotion that carries you away.)

Aside from its beauty and symbolic value, though, the flower is medicine. As a nerve relaxant that can help with sleep, I like passionflower (as tea, tincture, or even homeopathic) at least as well as skullcap, and I like it more than California poppy or valerian.