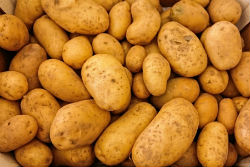 A well-respected and charming functional medicine doctor, Dr Alan Christianson, recently published an article about satiation in the context of (implicitly calorie-restricted) dieting for weight loss. After running through a few studies purporting to show that the foods you might expect to be satiating are not so, he settles on potatoes--but not chips or fries, mind you--as the most satiating food, and crowns his article with a "recipe": boiled salted potatoes, cooled and finished with a little olive oil.

Now it's not clear to me if the brief research survey is mere preamble to the drumroll recipe or if the recipe is mere rider to the 'shocking research findings,' nor what sort of naive audience is intended here, but there are so many things about this article that seem so wrong to me, it'll probably take two posts. Let's get started.

Before we get into the problems with the studies cited and how they are cited, let's look at the premise of the article:

So, the imagined scenario is that you've cut calories to create negative energy balance (i.e. to create a situation where you're using more energy than you're taking in), and your body's going to fight this by increased hunger signaling.

So far so good. A body's mechanisms are designed for homeostasis.

But the implication then (implied, not actually stated) is that as a result you, despite your best efforts, may succumb to this pressure for homeostasis and pig out, unless you stick to the food that makes you fullest for the amount of calories it contains--plain boiled potatoes. There's also the secondary claim that boiled and cooled potatoes contain a large amount of so-called resistant starch, which gut bacteria ferment into short-chain saturated fats.

And yes, "saturated" and "satiated" are from the same root. And you know what else is from the same root as "satiated"? SAD. Consider the word "fed," as in "well fed," and then consider the metaphorical extension, FED UP. The extension from "satiated" to SAD is identical. If all you're eating is a bowl of boiled potato quarters, you're going to be fed up, amirite? Aside from the fact that this article apparently jumps from studies done on foods in combination to conclusions about a single food item, on which more in a moment, this fed>fed up line of argumentation skates perilously close to the food reward hypothesis of eating/appetite, itself insulting and crazymaking. I'll come back to food reward in the next post.

Incidentally, if we're making claims about single food items, I'd be willing to bet that an isocaloric amount of almonds would be more satiating than the potatoes. But I digress.

Not only did I digress, I also illustrated another peevish point. While this article doesn't give a good definition of satiety in the first place, given all that's coming to light about how varied and disparate our gut bacteria are and how varied and disparate our subjective experience, at the very least it's some sort of whitewashing to give potatoes a halo because resistant starch/bacteria food. For a person not hosting the requisite bacteria, those same potatoes could cause blow-out-belly-balloon bloating and hangry cravings.

Of course I'm as aware as any writer of the impossibility of making statements that apply to everyone and the necessity to make generalizations. Anyone trying to help or inform themselves by reading anything "scientific" really must bear that in mind. You must constantly ask yourself "What's being oversimplified here?" "How does this apply to my situation, if it applies at all? A scientific study about dietary impacts might  follow a lot of people. *Many of them don't. But are you like "a lot of people"??

Dr Christianson wants to make the point that potatoes are the most filling of foods. Potatoes, the easy-to-grow non-grain starchy staple, the vilified nightshade-family member, the root that's actually a tuber. He also wants to make the points that low-glycemic foods are not more satiating than higher-glycemic foods, and that  fat is "not an effective hunger blocker."

Note here that rhetorically the argument's pitting a single food--potatoes--against a method of classifying foods--glycemic index--against a category of macronutrients--dietary fat. Is this comparing apples to oranges? Or chalk to cheese?

The glycemic index only means anything at all when a food is considered in isolation. As soon as you put some butter on that bread, whether it's whole wheat, white, or gluten free, you have significantly reduced its glycemic index. A snickers bar is actually a low-glycemic food, because it contains about as much fat as it does sugar. Given this very basic fact, the vague reporting that glycemic index of foods doesn't affect appetite or hunger hormones is meaningless.

As for the study on fats, once again context is key and generalizations are deceptive. Test subjects were given a breakfast with or without added fat and ate fewer calories at lunch if they hadn't had fat in their breakfasts. But what was the fat added to? And what type of fat was it? What you combine fat with can greatly affect how the body assimilates it, and this can have more to do with the cofactors than with the fat. (And what about the fact that this very well-designed study shows far greater satiation from an eggy breakfast than from a carby breakfast; thanks to Bill Lagakos's blog post (s.v. Tip 1) for this study.)

Fats are an important part of the diet, but they can easily be overeaten.

Um. Okay, but that statement comes out of left field, with no contextualizing from the study or anything else, and you're left to draw your own possibly erroneous conclusions about satiety. Again, the non-articulation of what satiety really is, especially in the context of calorie-restricted diets with the aim of weight loss, is really bothersome to me. Yes, a human organism is homeostatic. Yes, fats are denser than proteins and carbs and so the same volume of fat contains more calories. But:

It's worth noting that in general Dr Christianson sounds a cautious note about high-fat and  ketogenic diets. Given that he used to suffer from epilepsy, one of the best-studied cases in which ketogenic diets are beneficial, this is pretty surprising and should provoke some thoughts whatever your own position is.

I have a whole lot more to say about density and satiation and how it relates to habits, attention, and intention around eating, as well as some complaints about the whole food reward issue. That's for next time. (Part 2)