Seed, Pod, Strings, and All

metaphoring on the cardamom 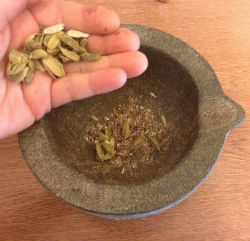 Cardamom, elettaria cardamomum, ginger family, we call it "hel" in Hebrew. "Hel" like "helwa"--sweet and beautiful and often cardamom flavored?

Carminative, aromatic, parochial and powerful, possessing an odor that, as a child,  I was convinced came from heaven and thus defined heaven. I had an old one-ounce unguent jar among my toys, and it was a jar of cardamom smell. I don't know how it came to have and hold that smell, and I didn't have the name "cardamom" yet, only "hel," but I knew it was heaven.

The way to heaven is through the nose, the nostrils are needle's eyes, which is why camels are called stinky and camel milk is the next best thing for humans to mother's milk.

Across the sea from the Levant, at my parents' house across the Atlantic gulf on my personal shoulders,  I brought boughs of creosote bush to summon the smell of desert rain but instead ended up making the house smell of cardamom--three gingers tea on the stove almost every day--ginger, turmeric, cardamom. 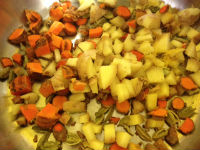 Two roots and a seed. The plants as a whole look quite similar and grow congenially together, in Hawaii, for instance.  But how is the aromatic intensity of a seed different from that of a root? That's another story for another evening.

But meanwhile we polish rice, we pearl barley, we stand over a pot of cooked garbanzo beans coaxing the skins off of every last one so that our houmous might be silky smooth with tahini of hulled sesame seeds.

Any herbalist and most chefs will tell you don't get the powder. Too much surface area to be losing spending sending forth all that wonderful aroma. But the divested--the proper word is "decorticated"--seeds are surely tempting. The seeds themselves are entire, glossy with aromatics, surface unbroken. Especially if you've had to filter bits of the pod through your teeth as you drank your thick levantine coffee laced with cardamom bruised in a mortar and pestle--even a high-powered blender doesn't quite pulverize that papery coat.

So, I smelled and ate and drank the seeds, sent their aroma up into the higher levels of my being, the heavens. Until some whole pods came into my hand and from my hand into the pestle and mortar, and I took some of those green paper pod jackets to my nose and heaven told me they're part of the story too.

How many things do we throw away that might truly be treasure? Toss the skeleton, when bone broth might be the most valuable cut of all? Opium--almost all of it's in the strands surrounding the seeds, the "cortex" of decortication. B vitamins polished away from rice and most of the nutrients and antioxidants right under the peels of carrots, avocados, apples, potatoes, etc.

I've been trying to shed this husk, this meat, this old unsuitable suit of body so long. But the inner parts don't work so well without it, and there are invisible inner parts above and beyond and outside of it too. The husk never quite loses its fibrous persistence in the grinder because it's a faithful container and holds the whole together. And when outer and inner and container are all pounded together, the suit-body-husk is a note in the same suite of suiteness, is (part and) parcel of the magic the spirit aroma.

So I'll gladly filter with my teeth the unreduced fibers of husk as I sip my three-gingers no-caffeine tulsi chai and take them each as reminders that this physical body self is integral and essential.

Written by Ela Harrison on Monday, 07 September 2015. Posted in Mindfulness, Herbs and Plants